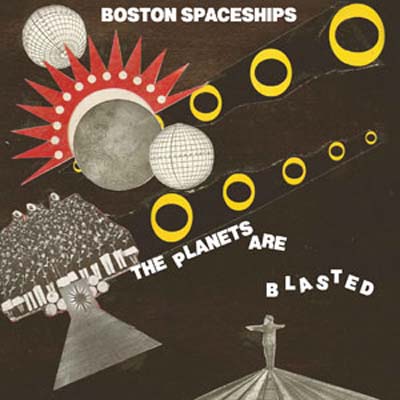 In my 2009 year-end review with my managing editor, Mr. Moderator, one of my stated objectives for 2010 was to more aggressively pursue reviewing new releases. It’s now May 2010, and I have not kept up my end of the bargain. Mr. Mod has funneled me a stack of new releases, and what have I done with them?

Thanks, Mod, I should have my review ready by Wednesday!

Cool, I’ve got a couple of things cooking, and then I should be able to hop on this one on Thursday!

Busy weekend ahead, so I’ll try to knock this out for you on Friday!

Man, I can be full of shit! I’m sorry, Mod, and I’m sorry Townspeople. I’m way behind on my scheduled reviews. To get back on schedule I pledge to – finally – tackle a box full of 2009 releases from Robert Pollard, maybe the hardest-working man in rock ‘n roll and surely a man whose wealth of output puts my own scant contributions to the Halls of Rock to shame! In the coming weeks I’ll finally catch up with my thoughts on Pollard releases by Boston Spaceships, Cosmos, and under his own name. I will follow the order prescribed by Townsman Kpdexter, who graciously supplied us with these releases and went as far as suggesting where I sit in relationship to my speakers while listening to each album. Kpdexter, you are the man!

For all the ways I’ve procrastinated and kept Mr. Mod off my back, the one thing I’ve consistently told him that has been true is that I’ve been listening to these records. Unlike my typical Insta-Reviews, which I crank out under great pressure and shame seconds before my extended deadline is to expire, I have a good handle on these albums and am confident that I can provide insights nearly justifying my 3-month delay in providing my reviews.

We’re going to start with Boston Spaceships’ The Planets Are Blasted. Boston Spaceships is Pollard with our old interview subject and Friend of the Hall, Chris Slusarenko and John Moen from The Decemberists. In 2009, this core trio managed to release 3 – count ’em 3 – albums! Pollard’s managing editor doesn’t need to get in his grill about lack of output.

As I mentioned, Kpdexter laid down an entire regimen for this set of planned reviews, suggesting not only the order in which I listened to Pollard’s 2009 output and my positioning relative my speakers but what I should eat and drink the day I first spin each CD, what music I should play before and after each initial spin, and what my Look should be. For this album, it was suggested I start my day with the previous night’s leftover kielbasa and a bottle of Poland’s Zywiec beer, served at room temperature. Following instructions I sat slightly toward the right speaker and wore my standard jeans and a faded black pocket t-shirt. I didn’t ask why, I just got around to doing as told…eventually.

A few months later, this continues to be my favorite of the Boston Spaceships albums, and one of my favorites among Pollard’s 2009 output. This album sounds spare at first, but it packs the punch of a strong power pop album without getting bogged down in a bunch of sissy harmonies and hand-holding lyrics. The arrangements are direct and focused in an almost New Wave style that Pollard has often used to great effect to support his soaring, mountaintop melodies. On songs like “Keep Me Down,” however, the approach is more nimble and natural than I’m used to hearing compared with earlier lo-fi recordings or some of my favorite in-your-face, late-period Guided By Voices songs, like “Back to the Lake.” I attribute a lot of this to drummer Moen, whose regular band has never done anything for me. He pushes songs forward in more tasteful ways I don’t usually associate with the drumming on Guided By Voices records and the few earlier Pollard solo records I’ve owned. He’s as energetic as any Keith Moon-inspired drummer on “Headache Revolution,” but there are also slow-burning performances on songs like “Dorothy’s a Planet” that bring out the best in Pollard’s jangly, early ’80s leanings, which rarely sound as polished as they do on this album.

Boston Spaceships, “Keep Me Down”

String arrangements come in at just the right time to subtly build the tension in some crunching missive, such as on “Tattoo Mission,” or lift the drama in the jangly “Queen of Stormy Weather.” Rather than feeling pasted in, they’re as natural and integrated as the strings on a 1960s Bee Gees record.

One ultimately needless beef: When listening to this album at my computer this scrolling note at the bottom of my RealPlayer constantly bugged me:

The Ships, as hardcore fans call them, are defined by Pollard’s love for rockin’ power pop a la Cheap Trick and the Mice.

First of all, can a new Pollard band that rarely plays live have already developed “hardcore fans” and a nickname? God bless ’em, if so!

JRMobFKG-a4]
Second, I don’t like Cheap Trick except for a couple of songs. I don’t want my listening experience tainted by thinking of them. Beside, these songs don’t sound any different than so many other songs Robert Pollard has done over the years. “My Heavy C,” for instance, sounds like it could only have come from the man who wrote “Everywhere With Helicopter.” Don’t credit those Cheap Trick douchebags for that talent!

Finally, I don’t recall ever hearing the music of The Mice. What good does it do to compare Boston Spaceships to a band I’ve never heard of? I’ve been grumbling. What is this copywriter trying to do, make me feel like an ill-informed, never-has-been hipster? Bastard! I went searching for The Mice and came across some good tunes from this mid-80s Cleveland power pop band. I give: this comparison made sense after all. Bravo!