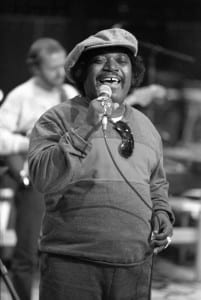 Singer Percy Sledge has died at 73, after an estimated 27,000 performances of “When a Man Loves a Woman.”

I used to think only so much of Sledge for his one big hit, no matter how great it was. It was overplayed by the time I was 15, and it inspired Procol Harum’s “Whiter Shade of Pale,” about which I’ve always had mixed feelings. About 15 years ago E. Pluribus Gergely and I saw him at a soul revue show at Atlantic City featuring Jerry Butler, Lloyd Price, and others. I’ve mentioned this show a few times before. Don Covay was in the audience, seated in our row, just a few people down from us!

EPG and I started to snicker as Percy waddled out in a tight-fitting tuxedo to sing his “one and only song.” (I know, I know, he made other records, some of which I’m sure are fine.) I expected him to come out like a wind-up doll, but a minute into the performance I felt he was still giving it his all. The performance moved me more than I could have imagined. That was the only song he sung that night, but he committed to it after god knows how many times he had to perform it. Pretty cool!

One Response to “Percy Sledge Dead at 73”