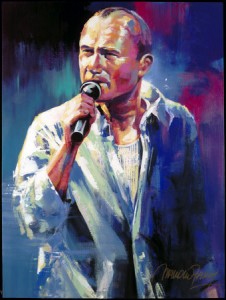 Guilty of one too many ding-a-lings?

We know there is a solid history of nonsense syllables in popular music, from Mairseydotes and Ragmop to Ob-La-Di and De Doo Doo Doo. Some of this usage is intentional or wordplay, but some of it is basically lazy lyric writing by a composer, who can’t seem to find better words to replace the ones that were ad-libbed.

On this front, is there any greater offender than Phil Collins? I know that ABACAB is a reference to musical structure, but let’s dispense with that lame defense because ABACAB is not a word. What is a “Paperlate” and a “Sussudio?”

I recall an interview with Paddy MacAloon, the man behind Prefab Sprout. He relayed a conversation he had with Paul McCartney about the song, “The King Of Rock and Roll,” which has the chorus lyric: “Hot dog, jumping frog, Albuquerque,” which is really intended to be a parody of mindless pop song lyrics. The irony was that this was Sprout’s big hit, thus McCartney told MacAloon that the song was his “My Ding-A-Ling” and that every songwriter gets to have one “My Ding-A-Ling.”

Thus, Phil Collins, in writing at least three nonsense songs, has vastly overshot his “My Ding-A-Ling” quota, which I believe is grounds for charging him with a Rock Crime, and surely he’s guilty of others. But the Cocteau Twins aside, is there anybody more guilty of lazy, nonsense, my-dingalinging than Phil Collins?