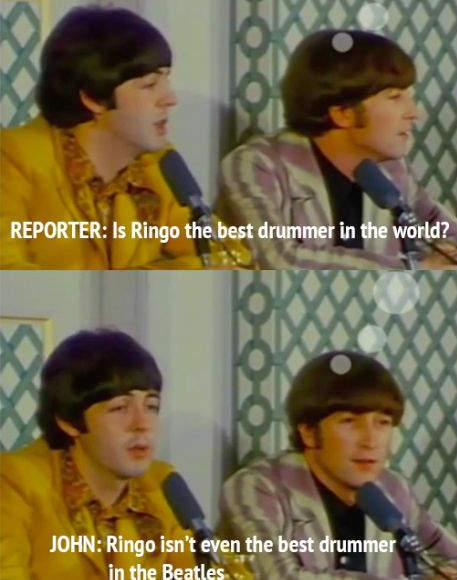 Ransom Stoddard: You’re not going to use the story, Mr. Scott?

Maxwell Scott: No, sir. This is the West, sir. When the legend becomes fact, print the legend.

– The Man Who Shot Liberty Valance

I came across this picture the other day with attached caption and vaguely remembered it from years ago. So I posted it on Facebook for a laugh and was immediately admonished. “Not true,” said one person. “Fake,” deadpanned another.

It occurred to me that this is not the first time I had seen or heard this quote, which is attributed to John, but I think refers to Paul.

The reason it pops up, I suspect, is that the “legend was fact,” arguably. I think you could argue that Paul was the best drummer in The Beatles. And the best guitar player. And singer. Guitarist. Piano. Sitar? I’m not saying you would win every argument, but there is an argument to be made there.

Can you think of another example, in all the world of rock, like this? A story that has been proven false beyond the shadow of a doubt but survives because it makes perfect sense?

20 Responses to “Print the Legend”