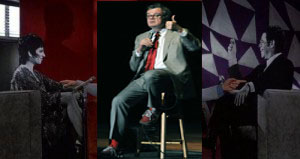 Can you believe it’s been a year of weekly Saturday Night Shut-In podcasts? Well, it has. This week Mr. Moderator and special guests bring you a very special broadcast coming at you LIVE from Urges in Atlantic City. He’ll share a rare, recently acquired slab of Thrifty Music and be joined by special guests Billy Bob Thornton, who’s written a fun, little ditty especially to commemorate our anniversary, and Andy Rooney.* He’ll end tonight’s episode with all the News From Rock Town Hall.

Saturday Night Shut-In is the Hall’s attempt at creating a virtual listening party. We talk a lot about music, but how often do we get to listen to it anymore—together? To date Townsman Hrrundivbakshi has manned the board for a few Thrifty Music editions, and next week promises a very special episode curated by the Royales, ladymiss and Mr. with a playlist hand selected by Friend of the Hall Simon Reynolds. I know the Web is loaded with high-tech virtual playlists tapped into Facebook, Twitter, and whatnot, but I continue to invite Townspeople to put together their own SNSI episode to share here in the Hall.

Thanks to all who contributed to this week’s anniversary episode and to those of you who have contributed to shows in our first year. You’ll probably want to share tonight’s episode with the family, maybe even invite a few neighbors over while you’re at it. Enjoy.

*NOTE: It’s unlikely Mr. Rooney will be able to join us tonight.