You may recall that, during the buzz that surrounded Rock Town Hall’s First Annual Rock and Roll Foyer of Fame Partial Lifetime Achievement Award ceremonies, we also touched on the Rock and Roll Hall of Fame and Museum‘s annual induction ceremony. At the time, we had hoped to hear back from an old friend, Howard Kramer, who’s been a curator there almost since the Hall’s inception. Howard’s a busy man but a man of his word. I knew Howard through his years working with the Dead Milkmen. He was always a hard-working, friendly, straight-up guy, and the years that have passed since we last met face to face have not seemed to change him. We hope you enjoy this behind-the-scenes look at a rock job probably any one of us would love to try on for size! When Howard asks if our definition of cool is as geeky as his, you too may think to yourself, Damn straight! Without further ado…Howard Kramer!

RTH: You’re the main curator of the Hall of Fame, right? What’s your exact title? How did you land there? Have you been there since the beginning?

HK: I’m not the “main” curator. My boss, Jim Henke, is the Chief Curator. My title is Curatorial Director. I’ve been here since December of 1996, about 15 months after the museum opened.

RTH: Do you want to share a bit of your background in rock prior to the Rock and Roll Hall of Fame?

HK: In general, my background was working with musicians. I’ve been an artists manager, a booking agent, and a tour manager. I also was a radio DJ at various points. I’m very proud of having worked with the Dead Milkmen. We had a lot of fun back in the day.

RTH: How do you acquire pieces for the Hall? Are there key criteria you follow? Roughly, how much of the collection is pieces you seek out vs pieces that are offered?

HK: We mostly acquire things by going directly to the source. If an artists doesn’t have stuff, invariably someone within their organization does. Occasionally, I’ll go to collectors, but the best stuff is usually still in the hands of the performer. The criteria are pretty simple; How well does this illustrate an element of someone’s career? 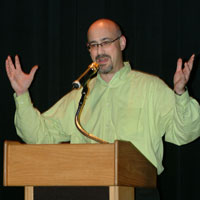 RTH: Is there an acquisition that most excited you? Did you get to touch it?

HK: I have a really hard time narrowing it down to a single thing. I’ve found some really cool things, provided your definition of cool is as geeky as mine. And, yes, I get to touch it.

RTH: Is there an acquisiton that’s most disturbed you, that you feared handling (eg, Ozzy‘s headless pigeon skeleton, Keith Richards‘ headband)?

HK: Not really, but some collections of records and magazines we get can be full of nasty dust and mold.

RTH: Is there an item or items you’d most like to acquire but have been unable to do so to date? What’s the hold up?

HK: There’s a bunch of things like that. In many cases, some things just don’t exist. In the moment, the artist of the people around them, didn’t think a particular item was worth saving. For instance, I once had a conversation with Bobby Rogers of Smokey Robinson and the Miracles about stage clothes. He told me that after a tour he couldn’t wait to get rid of them. That makes it difficult for me to curate exhibits if there isn’t any substantive material.

RTH: Did you have a favorite moment from this year’s induction ceremonies?

HK: The fact that The Stooges were actually there. Maybe they’ll be back next year for a better reason than playing some Madonna songs.

RTH: What’s your most memorable behind-the-scenes moment from one of these ceremonies?

HK: It was at an after party in a suite at the Waldorf. Allen Toussaint was at the piano playing “Stagger Lee” and Lloyd Price and Phil Spector were trading verses.

RTH: Do the artists being inducted get to pick the person introducing them? Do they need to pick from a list?

HK: All of that stuff is handled by the Rock and Roll Hall of Fame Foundation. They produce the show. I guess it’s safe to assume the inductee has some say about it.

RTH: I thought Billy Joel‘s introduction for John Mellencamp was pretty funny, but did he really expect anyone to believe that his band could have beaten a band of beef-nourished Heartland Rockers in a game of football? Come to think of it, do you think any band could take Mellencamp’s band in football?

RTH: Do you have a favorite show-ending All-Star Jam?

HK: In 1999, the assembled band onstage started to play “Let It Be”. Billy Joel was singing. Paul McCartney, who was sitting at a table watching, stood up, walked through the crowd and hopped on the stage and took over. I don’t think I’ve ever heard him sing better.

RTH: Did all the inductees at this year’s ceremony have to exit through the kitchen, or was that only required for The Stooges? Is the kitchen going to hear from the Board of Health now that Iggy’s walked through there without a shirt?

HK: I really don’t know. There should be an inquiry.

RTH: I assume bands and managers try to offer up their “pieces of history” – do you recall any offerings that were pathetically far from historic? Feel free to name names.

HK: Thanks for the open field, but I’ll just say that I’ve had to educate some people on what makes an exhibit.

RTH: Have you ever dropped and broken something headed for the collection? Did anyone notice the cracks when you glued it back together?

HK: I plead the fifth.

RTH: Thinking of Pete Rose, Shoeless Joe Jackson, and their gambling scandels, is there anything a musician could do to get banned from consideration for the Hall of Fame?

HK: Only for art crimes. Separate the art and the artist. Consider Little Willie John.

RTH: Does the Hall of Fame recognize and assess Rock Crimes committed during an nominee’s career (eg, the Jagger-Bowie collaboration on “Dancing in the Streets”)?

HK: We haven’t put together committee, if that’s what your asking.

RTH: During your lunch breaks, do you and your colleagues argue over who should or shouldn’t be in the Hall, or do you just talk about American Idol, like most other people in work do at lunch these days?

HK: On occasion, that discussion happens. I get it a lot more from people outside the building. You would be surprised at how seriously some people approach the subject.

RTH: If a power trio were being formed with Ginger Baker on drums and the Rock and Roll Hall of Fame and the Experience Music Project Museum duking it out for the lead guitar spot, who would play lead and who would have to settle for bass?

HK: The Country Music Hall of Fame can play bass. EMP and us can trade off on rhythm and lead.

RTH: Have you ever had the opportunity to thank Clive Davis or Jan Wenner for anything?

RTH: Who should emerge as the Jack Nicholson at the Oscars character of your broadcast, featured at the front table, grinning approvingly at each nominee and each joke cracked at his expense?

HK: Jann has filled that roll in the past.

RTH: What’s the real story behind Dean Clean‘s drum sticks getting yanked out of its display case at the Hall? Did Dean cross you a final time or something?

HK: Actually, the owner of the collection took them back. He was trying to sell the entire collection. Last I heard, he’d had no luck.

RTH: For those of us who have not yet been to the Rock and Roll Hall of Fame and Museum, what would you suggest we make sure to see above all other features?

HK: We have a movie called Mystery Train (not to be confused with the Jim Jarmusch film) that is a really great primer on how the elements of rock and roll came together. Beyond that it really is a matter of personal exploration. Rock and roll means different things to different people. That’s why the museum is set up the way it is. It allows the visitor to wander and explore.