SHORTS HAVE (ALMOST) NO BUSINESS IN ROCK ‘N ROLL! 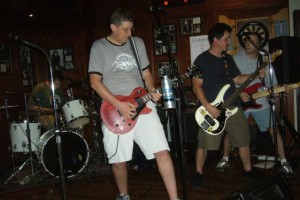 Not my friend’s old band, but just as guilty of showing calves and knees onstage.

Last week on vacation my family and I spent a lot of time in the company of an old musician friend. We got to talking about one of his old bands in his adopted home state, and he went on an amusing rant about how one of his bandmates chose the worst photo ever taken of my friend for inclusion on one of their CD covers. My friend was sure the choice of an especially unflattering photo was a power play. Well, maybe not, but he was laughing about how his old bandmate constantly failed to tune into matters of Look.

To spur our memory, my friend pulled out the CD booklet and showed us the photo. He was right, the band shot captured our usually slender friend in a rare, brief-lived Fat Elvis period. What stood out for me, however, once I got a look at his B-cup man boobs and abnormally thick calves, was the fact that all members of the band were wearing shorts. For shame, otherwise cool old band whose CD I also own and enjoy!

If a musician is getting dressed for a gig and considers wearing shorts, even when it’s an outdoor gig in sweltering heat, he or she should think twice, or as many times as it takes, to put that thought (and the shorts) in the back of the dresser drawer, far away from the stage. Shorts aren’t cool on stage. Plain and simple. Although rock ‘n roll can be a physical, even athletic exercise, musicians should not dress in a way that suggests they need added comfort, mobility, and ventilation. Shorts make everyone look like a kid, don’t they? Like a little kid. Little kids don’t play rock ‘n roll. Musicians should be cool enough to play music while wearing cool adult clothes, like jeans and button-down or t-shirts. They should be cool enough on the inside to wear outrageous outfits and makeup, if the gig calls for it, and not let a drip of sweat or even flames disturb their mascara.

And you know what? If their cool rock ‘n roll clothes actually make them sweat like pigs, that’s cool. Rock ‘n roll sweat is cool.

I don’t usually get sucked into the “[X] is so outrageous that he/she is cool!” mentality, but Freddy Mercury‘s So Outrageous! act finally wore me down about 5 years after he died. For as many ridiculous things as he wore, not even Freddy could pull off shorts. 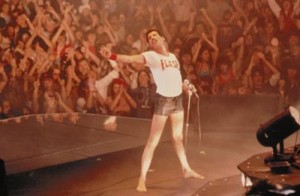 Maybe I’m wrong about women musicians not looking cool in shorts. Feel free to reconsider the evidence and come back in a few minutes. We’ll wait for you.

Meanwhile, there is one group of musicians who might be able to get away with wearing shorts…