Although hardcore musicians pioneered a nearly Anti-Look Movement, only hardcore drummers get a pass on wearing shorts onstage. It takes a lot of work to crank out those fast, shitty hardcore beats. And it’s not like they were getting rich playing that stuff. Cut those guys a break. Beside, unless you’re staring too hard at the drummer’s crotch, who can tell what they’ve got on back there?

Other drummers, for all the sweat and strained tendons they generate, are still subject to the No Shorts Onstage rule. Sorry.

Red Hot Chili Peppers have been known to wear shorts onstage, but thankfully they have a preferable alternative. 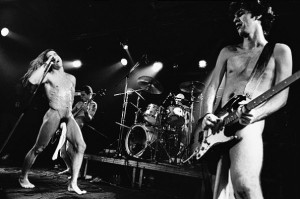 As far as I can tell, among non-hardcore drummers, only one musician has justified a pass for wearing shorts onstage…