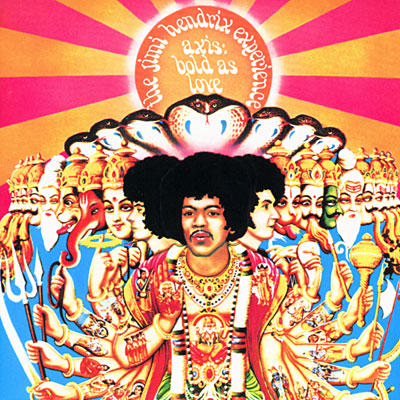 OK, I’m the wiseguy who put Jimi Hendrix‘s Axis: Bold as Love in the current “best post-peak album” poll. Although there are some keepers on his subsequent albums and although his playing did not diminish, I actually do feel that Hendrix peaked on Are You Experienced? His next 2 albums with the Experience would have benefitted from a visit by The Cutter (ie, editing). Once Mitch Mitchell and Noel Redding split all bets are off. I’m a huge fan of “Dolly Dagger,” for instance, but my enjoyment of the song rests solely on the joy of that main chord riff that runs under the verses.

As with “Dolly Dagger,” there’s enough great guitar work on Axis and Electric Ladyland that I can get over the fact that a lot of the songs blow, but as my close personal friend E. Pluribus Gergely and I were discussing over plates of “shit on a shingle” at a famed Roxborough diner this morning, Axis, in particular, would have benefitted from a serious reduction.

EPG suggests it should have been edited down to a single of “Little Wing” b/w “If 6 Was 9.” I suggest an EP, including those 2 songs along with “Castles Made of Sand” and “Wait Until Tomorrow.” I’m a sucker for any Hendrix song that’s in the “Wind Cries Mary” vein (ie, the former) and any Hendrix song that sounds like it could have been done by Otis Redding (ie, the latter, “Remember,” “Crosstown Traffic”). You may be able to twist my arm into including “Up From the Skies” for a 5-song EP, especially since I had to study it a few months ago to prepare for arrangement ideas on one of my bandmate’s new songs. I can do without all the sub-par “Purple Haze” workouts.

So what do you think, single or EP?

54 Responses to “Should Axis: Bold as Love Have Been Reduced to a Single or an EP?”