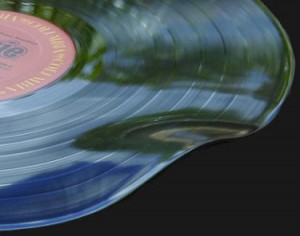 It’s yet one more blip on the radar, but I just read that the Sony (originally Columbia) pressing plant in Pitman, NJ is being shut down. Digital downloads of CDs, DVDs, video games, and—inevitably—bread, milk, and eggs have decreased the need for the plant, meaning the remaining 300 workers, following a layoff of 150 last year, will lose their jobs. My guess is most of them do not have the coding skills necessary to get new jobs in the digital distribution business.

Technology is great. Progress is necessary. Digital downloads have become a welcome addition to my enjoyment and exploration of music. I’m not about to fight any of these things, but I am entitled to a few minutes of reflection on what it meant to me to have had actual record pressing plants in my extended neck of the woods.

My grandparents moved from the Port Richmond section of Philadelphia to South Jersey when I was about 10 years old. They moved there when my grandfather, who’d always owned a couple of racehorses as a hobby to go along with the family business of running a luncheonette and a supplemental nighttime business that the Pennsylvania State Gaming Commission would have prefered to manage, decided to give up his city ways and begin a full-time business breeding and training thoroughbred horses.

I remember the tail end of my grandfather’s night owl days, with him rolling home from a long night’s work and play at 6:00 am. It was hard for any of us to imagine that he’d now be waking up at 6:oo am to feed the stud, mares, colts, and fillies on the farm; clean stalls; and then drive to the racetrack to do all that and more with the horses in training. But sure enough he did it pretty much through the end of his life, trading in his tailored suits for jeans and flannel shirts and even digging Willie Nelson cassettes on his drive to and from the track.

Although my grandparents’ new ranch house on 6 acres was only 20 minutes from my family’s rowhouse neighborhood, this was as deep into the “country” as any of us had ever ventured. On weekends and through the summer a new world opened to my brother and I. There was a new batch of friendly kids, ready for outdoor action, not hung up with acting tough or judging us for being the first kids in our neighborhood whose parents split up. There was open space for playing football at any time, on anyone’s property. There were woods with trails for riding our bikes. There were open fields, across which I could hit rocks with a baseball bat, seeing how many I could lift over the Green Monster of pine trees that bordered my grandparents’ property and that of a reclusive neighbor who, to this day, hasn’t been seen more than a handful of times. Shoot, he’s been living in seclusion for so long he may be dead in that house tucked at the back of his 6 acres!

As we became more embedded in this country home away from home, our new friends took us further into their world, eventually introducing us to the “Tyco Dump,” which we’d find out years later was actually a landfill that ranked #3 among Superfund clean-up sites. My brother and I had played in some godawful dirty industrial sites before while hanging with the neighborhood kids around our grandparents’ luncheonette before, but hide-and-seek among the refuse of factory lots just involved accumulating added depths of typcial city grime, occasional rat sightings, and a yearly foray down a sewer to retrieve the last pimple ball, so our stickball games could continue. Until visiting the Tyco Dump, we’d never had to worry about stepping into a mound of sandy soil that suddenly turned into a quicksand-like muck of what must have been discarded anti-freeze. Although we were dumb kids, the Dump surely posed some hazards, but as you might have guessed from the name the kids gave it, the hazards were offset by the fact that a nearby Tyco toy manufacturing company dumped there!

After locating the freshest Tyco dumping site among mounds of rotting trash, over-the-counter medications long past their shelf life, chemical waste, and random stuff we had no interest dragging home, we’d start digging through the rubble, sometimes finding nothing more than a few Hot Wheels cars or pieces of racing track but often enough finding entire Hot Wheels sets in crushed boxes! 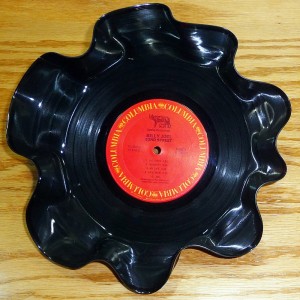 An Etsy type must have trashpicked here too.

Another area manufacturer that dumped on this site was Columbia Records, this same pressing plant that’s now closing. Our trips to the Dump began in 1975 or so and lasted through the next few years. When we were introduced to the place I had just signed up for the totally awesome Columbia House Records Club, which enabled me, through their exclusive introductory offer, to choose any 12 records or cassettes for just a penny! I chose 12 cassettes, the happening, transportable, new technology. Suddenly, to go along with my two Paul Simon cassettes, whichever self-titled Chicago album I selected, a Gladys Knight and the Pips album, and whatever else filled out my introductory dozen, I had the pick of hundreds of warped albums and 45s Columbia Records’ pressing plant screwed up or overproduced. Most of the records were warped beyond saving, but there were times I recall bringing home a record and sitting it under a dictionary in the sun, thinking that may unwarp it. The process may have worked once, on the 45 of Nick Gilder’s “Hot Child in the City” (Chyrsalis Records releases were dumped there too), or maybe I learned to tolerate the extra rhythm induced by the warp.

The bigger problem with the Columbia Records’ pressing plant refuse, way bigger than the poor condition of so many of the records, was that their mid-’70s roster sucked. More often than not I’d excitedly rip open a fresh box of dumped lps to find something by…Billy Joel. Even a clean, unwarped copy of a Billy Joel album was not worth bringing home, but still, there was something magical about knowing that real rock ‘n roll records were being produced a couple of miles away from my grandparents’ house.

Over time I had visions of following a trail of dropped records from the Tyco Dump back to the pressing plant, where I’d get a tour and learn how my own records would one day be produced. As my friends and I got into making music and recording our first demos, we’d run into people who’d worked at a record pressing plant or “one-stop” distributor. They’d had a hand in the creation and distribution of records we loved. They were some of the first people to have touched these otherworldly platters. Soon enough we’d realize that the work and pay these folks did probably weren’t up to even a fraction of the magic we’d ascribed to these industry jobs, but still…for all the warped records I’d picked through in the Dump they were probably able to take home the pick of the litter among the discards. When I was a teenage boy that seemed cool. To this day it seems pretty cool. In the digital age kids won’t luck into finding warped records dumped in a toxic landfill anymore.

20 Responses to “Sony Records Plant Closes, or Why Can’t I Touch It?”