Few details and eyewitness accounts remain of former Lone Justice guitarist Shayne Fontayne‘s stint accompanying The Boss on His controversial albums and tours following a move to LA and the dumping of His E Street Band. Even fewer free images survive on the Web of Fontayne alongside The Boss, with Fontayne’s knees bent, guitar slung low, and bandana tied around his thigh, as the scriptures describe him. For our fifth work of art in the Stations of The Boss series, mixed-media artist Cam Sutton, of Shelby, North Carolina, worked from stills of the live clip that introduced this piece.

“I had little choice,” says Sutton, “His people must have scrubbed the Web clean of photographic evidence of this collaboration.”

According to a document that Sutton uncovered identified only as “presskit_bio.pdf,” Fontayne was merely a passerby, compelled to serve The Boss at the request of producer Jimmy Iovine.

In January 1992, Shane received a call from Jimmy Iovine who said, “Hey Shane, a friend of mine wants to know if you want to go out on the road.” “Who’s your friend?” Shane responded. “Springsteen,” Jimmy replied. Bruce had just seen a rerun of Saturday Night Live on which Shane had performed with Lone Justice. Springsteen had taken a departure from his E-Street band and was looking for a different set of musicians to take out on the road. The only guitarist asked to audition, Shane was invited to join the band. To start, there was a small industry show at The Bottom Line. Then there was an appearance on Saturday Night Live. “Bruce had never done network television before. He asked my opinion on whether or not he should do Saturday Night Live and I told him it was one of the biggest rushes I had ever had.”

Although Fontayne is barely remembered by His fans, the video clip demonstrates the support he provided the beaten, weary Springsteen. Sutton premieres his work of art and explains his thinking behind it following the jump!
END_OF_DOCUMENT_TOKEN_TO_BE_REPLACED 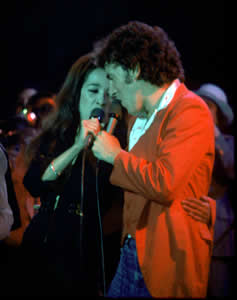 In 1977, Ronnie Spector, the spiritual mother of Bruce, recorded a single produced by His guitarist and bandleader, Miami Steve, and backed by His E Street Band. The involvement of The Boss had to be kept secret for fear of retaliation by former manager Mike Appel, with whom He was already involved in career-threatening litigation, litigation that His fans feared would threaten His mission.

However, the lawsuits brought forth by Appel could not contain His ability to put forth His message directly, on stage in His customary 7-hour concerts. Along with His E Street disciples and the support of Southside Johnny and the Asbury Jukes, The Boss continued to preach, and on a May night in Red Bank, New Jersey, at the Monmouth Arts Center, he experienced the fateful meeting with his “mother,” Ronnie Spector, that our artist for Station 4 of The Boss, Holly Niagra, of Windsor Locks, Connecticut, has interpreted after the jump…
END_OF_DOCUMENT_TOKEN_TO_BE_REPLACED 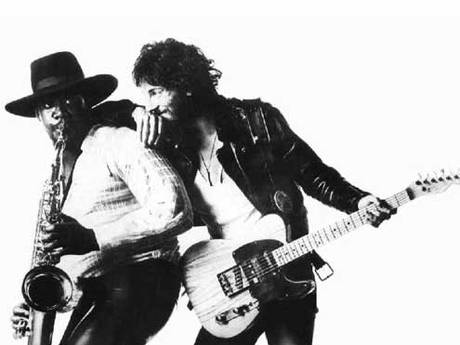 Artist Hans Wheeler, of Dayton, Ohio, chose the iconic image of The Boss leaning on The Big Man for support during the trying times of His lawsuit with original manager Mike Appel. Wheeler’s original work of art, Bruce Falls the First Time, follows the jump!
END_OF_DOCUMENT_TOKEN_TO_BE_REPLACED 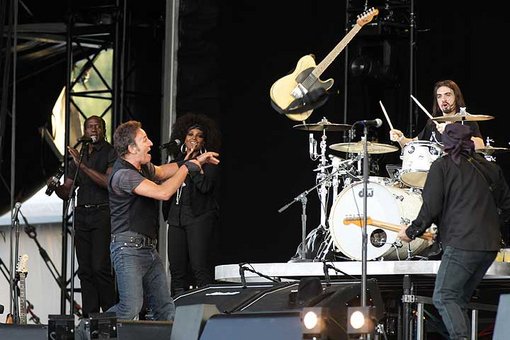 For our second piece in the Stations of the Boss series, artist Toby Wetland, has depicted the moment when Bruce was given his guitar to bear.

“Obviously,” says Wetland, this is not a historically accurate representation, as not only Max Weinberg’s son but Max himself would not have been on drums when Bruce received his first guitar. I chose this shot because it looked like his Tele is raining down from the heavens.”
END_OF_DOCUMENT_TOKEN_TO_BE_REPLACED 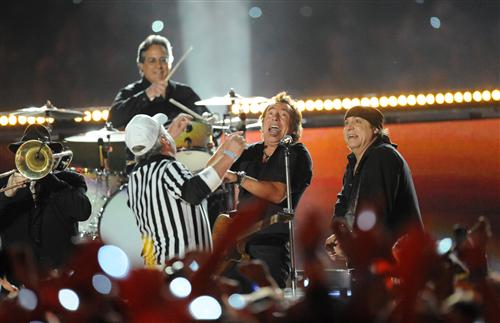 In February 2009 Rock Town Hall commissioned 14 artists from around the world to depict iconic scenes representing Bruce Springsteen’s ascendancy to the undisputed throne of rock. The Stations of the Boss initiative is an effort to shine a light on the frequently overlooked iconic projections of The Boss and His E Street Band. We know Him as a Humble Man, a Common Man, and a Man of the People, but too often the media and even his own handlers downplay the positively messianic effect His performances have on followers.

To help rectify these oversights we asked our artists to base their works on actual images from His performances. Our first Station in this series, Bruce Is Condemned to Rock, depicts the fateful 2008 Super Bowl performance, pictured above, that sealed Springsteen’s legacy.

Our artist, Toby Wetland, from Bonners Ferry, Idaho, USA, painted this scene in the style of Paul Gaugin‘s Jacob Wrestling with an Angel. “For years The Boss struggled with maintaining His identity within the group collective,” says Wetland. “Although He is clearly stunned by the ref’s judgment, I wanted the painting to hint at the comforting role His bandmates play in helping Him acccept His destiny as leader of the E Street Band and no other collection of musicians.”

The original work of art, Bruce Is Condemnned to Rock, follows the jump.
END_OF_DOCUMENT_TOKEN_TO_BE_REPLACED