The Rock ‘n Roll Hall of Fame has announced its nominees for possible induction in 2009. A lucky 5 of the following will be elected by more than 500 voters:

Those of you who’ve bitched about the exclusion of The Stooges, will you be happy if they’re finally inducted?

Those of you who have felt that disco and other forms of dance music have been overlooked, is the induction of Chic your key hope for the Class of 2009?

Fans of Jeff Beck, who’s already in the HoF as part of The Yardbirds, do you even scratch your head and say Huh?

Will Metallica’s therapist be recognized as part of the band’s inevitable induction ceremony?

I can tell you that Mr. Mod’s main concern and rooting interest is whether War, if elected for induction, will also recognize its Eric Burdon and War roots. 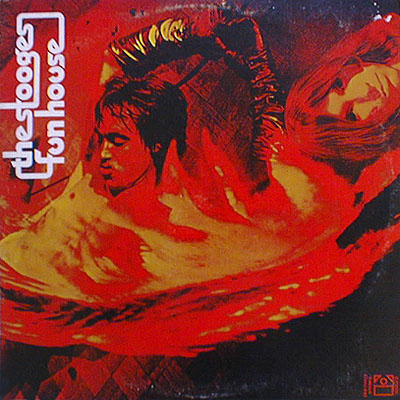 Next to the music itself on The Stooges’ Funhouse, the most influential thing about that album is the shot of the band sprawled out on that Afghan rug when you open the gatefold sleeve.

Full image after the fold.
END_OF_DOCUMENT_TOKEN_TO_BE_REPLACED

During the first week of freshman year in college I immediately bonded with a fellow supercharged, true believer in rock ‘n roll named Doug. The kid had a raw nerve quality that fed into my own need for letting it all hang out. With a wiry build, a head full of thick curls, and a jagged nose, Doug talked in quick spurts, in deep grunts. His days were spent on a teeter-totter of partying his ass off at night and then spending the following morning jogging off the ills of the previous night. In those days I maintained a more even-keeled dedication to destructive behavior, so I rarely saw Doug while the sun shined.

We’d get together a couple of nights a week to do bong hits and examine the grooves of our favorite records. We’d each pull out 3 or 4 records the other guy didn’t know or may not have fully appreciated and then spend a couple of hours pointing out all the transcendent moments, all the while gauging each other’s reaction and calculating “turn-on points” we might be collecting. (Looking back, no wonder we weren’t getting laid nearly as much as we would have liked.) One record we both loved that we agreed required exclusive examination was The Stooges’ Funhouse.
END_OF_DOCUMENT_TOKEN_TO_BE_REPLACED