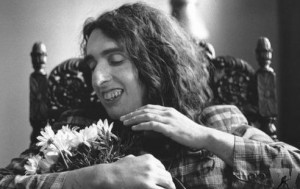 Like a slightly younger approximation of Hubert, son of Rawlin, Herbert Khaury was in his 30s and still unusual when he finally got noticed. The Bonzos supported Mr Khaury in 1968 at the Royal Albert Hall, and I have occasionally wondered since whether Viv Stanshall based Hubert either consciously or subconsciously on Herbert, or at least his alter-ego, Tiny Tim.

He certainly was unusual.

I first chanced upon him as the musical interlude on a popular game-show on British TV in about 1968, as he wandered through a mock up of an English Country Garden plinking his ukulele and singing “Tiptoe Thru The Tulips” in glorious black and white while my grandparents tapped their toes in time to my mother railing and seething against this assault on her sensitivities.

Rolling forward about a decade, I started going on the train to the first of the Brighton record fairs as soon as the Saturday job money started picking up, and I can remember quite clearly the one when I came home proudly bearing copies of An Evening with Wild Man Fischer, half-a-dozen Monkees albums, some really weird looking singles, a demo of ? and the Mysterians’ “96 Tears,” and a copy of God Bless Tiny Tim.

“The Other Side” is, though admittedly by a fairly short stretch, the oddest song on the album. I wasn’t expecting to find it on Youtube, and was completely unprepared for this live rendition.

That evening I took God Bless Tiny Tim around to my mate’s house, the mate in whose house I would be living in just a few months later, and we listened to it three or four times, we would enjoy it many more times in the years to come, and he was as excited as I was when a year or so later I chanced upon a copy of Tiny Tim’s Second Album, which is as enjoyable in its own way as its predecessor.

As punk was turning into new wave, and as new wave turned into new romanticism and it all mushed back into nasty early ’80s pop, the first two Tiny Tim albums provided regular welcome respite.