Do I blame this Florence + The Machine cover of Buddy Holly‘s “Not Fade Away” on Tom Waits and his percussion and production crew from the early 1980s? I think so, and it’s time musicians stop dicking around with junkyard percussion, already!

END_OF_DOCUMENT_TOKEN_TO_BE_REPLACED

I’ve got a much bigger fish to fry later today, but to get things rolling I’ve been chewing on the following thought: Does Tom Waits‘ performance in Jim Jarmusch‘s Down By Law overshadow his entire musical output?

To be clear, I own and enjoy 5 Waits albums: The trio of “junkyard” albums that first caught my attention in the mid-’80s, Rain Dogs, Swordfishtrombones, and Frank’s Wild Years, and then 2 earlier albums that an old friend taped me after I’d finally given this artist the time of day, The Heart of Saturday Night and Nighthawks at the Diner. Oh, I also own the live album that came out last year, Glitter and Doom Live. There’s much I dig in Waits’ music and lyrics, even though his hobo hipster delivery are a bit too much for me to take on a regular basis. I consider his albums Tuxedo Albums, that is, classy, intelligent albums I can pull out once a year for a special occasion.

Unlike a Coffee Table Album (eg, any box set of an artist performing in a genre I typically don’t care about but feel I can cover in one broad stroke, such as the Patsy Cline box set I bought years ago to get my wife and all other country music fans off my back) or an Olive Branch Album (ie, my RTH-approved Jackson Browne album, Late for the Sky), both of which are meant to advertise my musical depth, diversity, tolerance, and whatnot, my Tom Waits Tuxedo Albums make me feel really good about myself whenever I need to “clean up” and pop one on my turntable. I’m sure I’ve got a few friends and acquaintences who think better of me for having seen me in the light of the album-closing version of “Innocent When You Dream.”

However, for all his fine musical tailoring, Waits’ music feels intellectually dishonest and showy. His performance in Down By Law, on the other hand, is One From the Heart, to quote the title of a Copola movie he worked on. My eyes are flooded with tears of laughter any time Waits appears in that movie. I’ve never gotten half that meaningful an emotion out of a single Waits song, but man can that guy play his role in Down By Law!

It’s a shame. Tom Waits has done a lot of quality music—and I know people who’ve traveled to East Jabip to see one of his rare live performances—but I don’t know if he can ever top his role in Down By Law. Maybe he’s been in the wrong business all these years. What do you think? 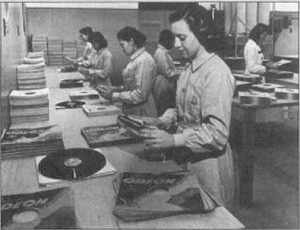 A shot in the arm of the recording industry!

Now, they are finally starting to cater to the criminally underserved 78 rpm market.

Although this doesn’t benefit me directly, it gives me hope that someday soon I’ll be able to enjoy new releases on my preferred format, the wax cylinder.

On a related note, is anybody else excited about the Leon Redbone box set that is being released exclusively on 1,500 kg piano rolls?

The Rock and Roll Hall of Fame Nominees have been announced.

Perhaps I’m still holding a grudge against Bon Jovi for his lunkheaded comments about The Replacements (“Last Great band of the decade? I don’t even know who they are.”) in the late ’80s, but really, the fact that he and Tom Waits might be sharing the same honor on the same night for their contributions is ridiculous. (Jon, if you’re reading this, Tom Waits is the guy who wrote that song “Downtown Train,” which Rod Stewart ended up butchering.)
END_OF_DOCUMENT_TOKEN_TO_BE_REPLACED