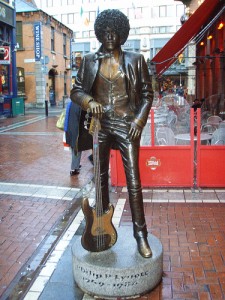 Is there a particular part in a song that you like enough to wait through all the boring (or worse) bits? While flipping stations this morning I landed on a song I’ve never warmed up to, except for one part: U2’s “Sunday Bloody Sunday.” I have always liked the “How long, how long must we sing our song?” break enough to wait through the song’s annoying elements. (And I know I’m probably in a tiny minority of people who find this song annoying for the reasons I find it annoying.)

That song and the War album mark my initial drifting from my high school U2 fandom. The song is not terrible and there are always elements I like, but the open martial snare beat, swishy hi-hats, and the Celtic violins that punctuate the song always bugged me. I don’t like the production of War; to my ears it exposes the things I like least about the band’s rhythm section. For some reason, too, the production of Bono’s voice on “Sunday Bloody Sunday” made me feel for the first time that he was trying too hard to transcend his band’s humble music. These days, the wiser, kinder, gentler me has come to appreciate Bono’s abundance of pomp, but I still get the sense he’s milking me a little too hard on that song, at least until the “How long, how long must we sing our song?” break kicks in. That break delivers the goods in ways I was accustomed to the goods having been delivered on U2’s first 2 albums.

This morning, like most times that song has come on the radio, I stuck with “Sunday Bloody Sunday” in all its swishy, high-end hollowness so I could enjoy that break. How about you, what song has a specific part you like so much that you’ll tolerate the rest of the song for a few measures of glory?

Let’s start 2013 by thinking of all the songs that ring in the New. It’s a New Last Man Standing! Your challenge: to think of song titles that use the word “new.” I’ll start it off with the (very) obvious one:

From the Sky Down, the new U2 documentary, covers the band’s early ’90s rebirth from massively popular, if slightly derided, Irish cowboy-mystics to massively popular, if slightly begrudgingly respected (by those few, like yours truly, who’d spent the latter half of the ’80s deriding them), international multimedia mavens. Although short on details for the non-fanboy (eg, band members often talk off-camera with no identifying text or image, leaving someone like myself to try to put a face to similar-sounding voices), the film is a heartwarming celebration of rock ‘n roll band brotherhood and the creative process.

In the first 40 minutes of From the Sky Down the band members take themselves to task for pretty much everything my band of rock ‘n roll brothers and I took them down for during the height of The Joshua Tree through Rattle and Hum era: the overly serious, sepia-toned band photos and the perception of rock imperialism and latent expertise concerning American roots music. About the only things they don’t excoriate themselves for during the late-’80s are the loosely tied ponytails and sleeveless shirts with vests. If you’re into that sort of thing, DVR this bad boy and wait until the family’s in bed!

END_OF_DOCUMENT_TOKEN_TO_BE_REPLACED

The wisdom of The Hall continues to amaze me. For as many knowledgeable individuals who dazzle with their rock knowledge, it is the collective wisdom of our participants that I find most dazzling.

It is in this spirit that I want to allow for further amazement—not only for the people but by the people. Rather than turn this into my own original post, maybe even do a few minutes of research on the Web, I thought better of it. Instead, I’d like to pose a question on behalf of a fellow Townsperson to the collective wisdom of The Orockle.

Townsman trigmogigmo has a question he’d like to pose—and one that he hopes will inspire other questions we’d like to have asked when we had more time to find the answers ourselves. Read on, please. END_OF_DOCUMENT_TOKEN_TO_BE_REPLACED

I finally got a chance to watch Nowhere Boy, the early John Lennon biopic starring Aaron Johnson, the titular star of Kick-Ass, and Kristin Scott-Thomas (as Aunt Mimi) tonight. It was solid. I usually dislike biopics, especially artist biopics, but once this film got past an eddy of Oedipal issues between young John and Julia (Get a room, already!, I was feeling at one point) it stuck to a pretty down-to-earth imagining of Lennon’s late-teenage life and his formation of the eventual Beatles. It certainly helped that the actors portraying the musicians actually knew how to play guitar. As far as Beatles biopics go, I wouldn’t rank it near the best, The Rutles’ All You Need Is Cash, or the most interesting portrayal of early Beatles speculation, 1991’s The Hours and Times, but it did its part to recount some key articles of faith.

I DVR’d this Lennon flick from Showtime. Following the credits there was the above trailer for a new U2 documentary, From the Sky Down, on the making of my favorite album by them, Achtung Baby. This trailer has Recounting of Articles of Faith written all over it! It debuts Saturday, October 29. 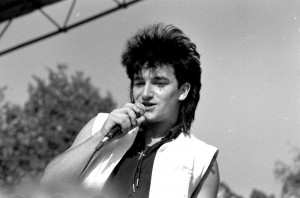 I may have mentioned this once before, but my mom first hit the nail on the head regarding Bono and U2 a few years ago, when the band played the halftime show at the Super Bowl. She called me the day after.

“Jimmy,” as she still calls me, “what do you know about this band U2? Do you like them?”

“They’re OK,” I said. “I like a few of their songs. They’ve been around since I was in high school.”

“Mmm,” she said, noting correctly that she didn’t recall me ever talking about them when I was living at home. “That little singer,” she continued, in this most unexpected telephone chat, “really makes that band. There’s not much to their music, but he works overtime!”

My first thought was, “Jeez, as if enough girls haven’t dug Bono, now my mom’s under his spell too!” As she continued extolling the virtues of “that little singer,” however, the years of hating Bono in his mullet, then ponytail and salt-of-the-earth hat and vests without shirts and those godawful late-’80s efforts to weave his way into the fabric of every strain of American roots music under the sun started to wash away.

After I got off the phone with Bono’s Newest Admirer, I remembered how much I liked the good bits of the band’s first two albums, before the grandstanding of War and the rhythm section’s clear musical limitations began to drive me away; before those serious videos involving ponytails, bare shoulders, and salt-of-the-earth hats put me way over the edge. I pulled out my copy of Achtung Baby, the band’s first attempt at winning back my muted admiration, which I came around to liking during the year my wife and I lived in Hungary. That album gave off a cooler, more UK ’60s vibe that put the band’s sepia-toned Americana wannabe vibe in the rearview mirror—but not out of sight. I still spent more time than any adult should spend cutting up on Bono and his mates. I still found myself watching bits of Rattle and Hum, whenever I came across the movie while flipping channels, just to sharpen my blade. Just thinking of that period of U2 again almost makes me want to take back what I’m about to say. END_OF_DOCUMENT_TOKEN_TO_BE_REPLACED