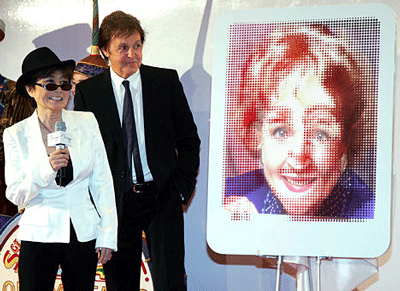 Listen, I’m not one of those misogynist Yoko haters who blame her for breaking up the Beatles. As much as I grew up loving—and still love—the band, I think they broke up at the right time. By 1974, it would have stunk to have seen them go through their worst solo phases collectively. Imagine if they’d done like the Stones and survived into the ’80s and beyond? No thank you! There are enough 50-year-old fanboys still trying to pull off a variation of the moptop to carry on their would-be sagging legacy.

I’ll go one step further in making it clear that I’m not a Yoko hater: I think that, next to dropping acid, Yoko is the best thing that happened to John. It was cool seeing John grow up and become a somewhat peaceful family man. It gave me some hope during tough times. She seemed like a great match for John, and a cool person in her own right.

What I am is a music fan who is completely sick of Yoko’s attempts at making music—or perhaps I should say our attempts at liking it. I like Yoko’s first Plastic Ono Band album. It’s a great “F-U!” album, with John and that raw, minimalist band cranking out a racket behind Yoko’s screeching. She did some other screeching recordings in that format in the early ’70s that I also enjoy. Then she got the bright idea that she should sing actual lyrics with something resembling a melody. Beside her lone vocal line in “Bungalow Bill” and her chorus vocals on “Happy X-Mas (War Is Over)” I have felt that Yoko has no business going anywhere near actual lyrics and anything resembling a melody.

I mourned for the widowed Yoko as much as the next Beatles fan when John was murdered at the release of their Double Fantasy album, but I gladly skipped every one of Yoko’s songs. As a singer, she’s well beneath “rank amateur.” The likes of the B-52s could rave all they wanted about the influence Yoko had on them. They had a chance of getting a dinner invitation. What did I have to gain by pretending to like that shit? Julian wasn’t her kid, and I was way too old to have a play date with Sean.

Yoko’s still at it, and my Facebook feed is ablaze with people raving over her performance on the Late Show With David Letterman, backed by the so-cool-I-can’t-believe-I’m-worthy-of-living-in-the-same-world-with-them Flaming Lips (and Sean). If she’s not already, I bet Yoko will be trending today. Have you seen this yet? Check it out:

END_OF_DOCUMENT_TOKEN_TO_BE_REPLACED

In our Bullshit On thread involving Linda McCartney, Townsman Oats made the follow wisecrack (I think) that got me thinking about something else:

I always thought Linda helped invent the two-fingered style of playing Minimoog that has since popped up in all kinds of settings, from The Cars to Dr. Dre to assorted indie rockers.

The “something else” I thought about was John Lennon‘s subtle claims in his final interviews that Yoko must have been a big influence on New Wave bands they were hearing, like The B-52s. Perhaps Yoko was the influence for the singing style of those women, but what this really got me thinking about were suspect claims of influence in rock ‘n roll.

These suspect claims of influence often come long after the fact. They sometimes seem orchestrated to add relevance to the comebacking career of a veteran artist, such as Neil Young‘s Godfather of Grunge campaign. There may be merit to these claims, but they can just as easily be as whacked out as the now-commonly accepted notion that Buddy Holly ripped off his entire act from Bo Diddley.

What claims of influence in rock ‘n roll do you find especially suspect?