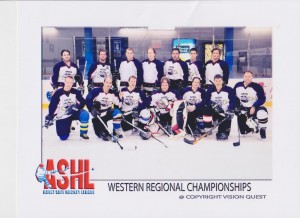 Here’s a recent picture of my beer league hockey team in Vancouver. If you look close, you’ll see that many of us are early-40s, while others are 20 years younger.

We didn’t intend for this to happen. Most of us older guys would have been content with seeing other older guys show up once a week. But other older guys had kids, wives, jobs -all things that interfered with showing up to play hockey and, more importantly, drink beer.

So, somehow, a youth movement happened on our team, which has been around since 1987, incidentally. The young kids though make it a pretty fun environment for the rest of us. It’s fun when they fuck up and we mock them. It’s fun to listen to them complain about seemingly trivial life problems, like STDs. And it’s fun to watch the blinding speed of a kid two years out of junior who doesn’t know Bobby Orr from Bobby Hull.

Would Rock Town Hall benefit from a youth movement? You be the judge. Bonus points to the RTHers who can identify NorthVanCoveman in the pic…

So, I’m sitting at work listening to Tokyo Police Club, who I kinda dig. The reason being, they play super energetic, fun, angular pop-punk, which is kinda my sweet spot. But it brings up a concern I have (or rather a realization) that, after bands get to a certain age, I kinda turn off to them.

This is due to a number of reasons: I think once bands get to a certain age, they understandably mellow and get a larger world view, which, while I respect, I don’t necessarily want from my rock and roll. Is it that all these young bands churning out three-chord rock and singing about love in a naive way really rock in way that older bands … can’t??? Then, as these same bands age, they just don’t come to the plate with that kind of energy. I probably wouldn’t want to have dinner with these young-uns but I respect their youthful musical zeal.

Am I becoming a rock Roman Polanski? Anyone else feel the same way?