Whether the stated bandleader or not, the drummer often functions as the “captain” on stage. Some drummers take this responsibility to heart, clearly leading the band from the riser at the back of the stage. I call these the Field Generals. I’m probably missing some great examples, but I pity the ego-laden bandmates who crossed a Ginger Baker or a Mick Fleetwood. Hell, the giant Fleetwood’s not afraid to come out from behind his kit with that African talking drum to restore order.

I bet Bruce Springsteen and the E Street Band’s Max Weinberg aspires to Field General status, but someone’s always standing in his way. 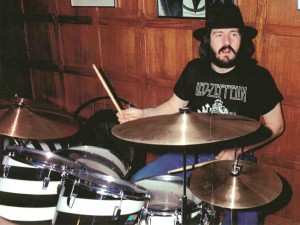 The Jock vs The Bruiser

Power is a cherished quality among rock drummers. There are Jock drummers like The Minutemen’s George Hurley and King Crimson’s Bill Bruford, who mix in speed and grace, and then there is the Classic Rock-era kick-and-snare focused Bruiser, like John Bonham.

Other Areas to Explore?

Like I said, this is just a start. Certainly there are other areas to explore, other styles to identify. I know nothing about drumming styles of heavy metal drummers, for instance. Are those drummers anything but Bruisers and Jocks? One thing I’m curious to learn about is whether there is an ideal stylistic balance required in bands with 2 drummers (eg, the Dead, the Doobies, the Allmans, now Radiohead).