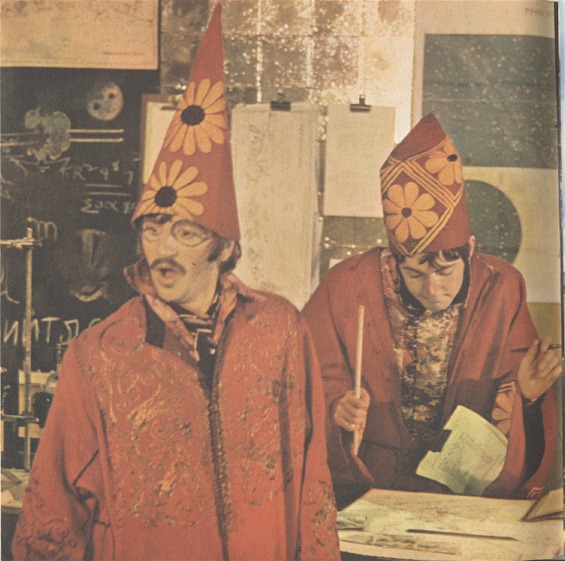 A Wizard, A True Star

On Day 2 of Rock Town Hall’s groundbreaking series on a reappreciation of The Beatles’ long-dismissed Magical Mystery Tour album on the strength of the 1971 German true stereo release we ask you to open your minds and hearts to the pleasures of one of the most-despised Beatles songs, Paul McCartney’s cloying “The Fool on the Hill”.

The Beatles, “The Fool on the Hill” (German true stereo mix)

The space that the true stereo version grants to the arrangement of this song helps greatly. I’ve always thought of this album as the most psychedelic of Beatles albums (and please don’t Pince Nez me on the album’s history as a collected ep and singles), and the true stereo mix increases the “head” appeal, let’s the mood of each song better seep into one’s consciousness, man. Previously unaccessible nooks and crannies of “The Fool on the Hill” – the slightly out of tune mellotron parts, the woodwinds and whatnot, the gentle rhythm guitar and piano – open up. Suddenly, it’s like one of those weird, wonderful songs from Roy Wood’s Boulders that only I and another half dozen people on the planet seem to get. McCartney actually delivers a heartfelt vocal, although I can do without the second “Ohhhhh…round and round…” part on the fadeout. Even in true stereo the song has worn out its welcome by this point.

The true stereo mix does not help the lyrics. It’s too bad he couldn’t have written some gibberish; this would have topped most of the filler songs on Pink Floyd’s Piper at the Gates of Dawn. Speaking of McCartney lyrics, I’m reminded of a morning last week, when I played my wife the recent McCartney album for the first time, and four songs in she said, “OK, enough of this! When’s he going to try to write lyrics that have something to do with an adult man’s life?” Then she quoted a particularly bad lyric that just pushed her past her limits. “Can’t he take lessons from Nick Lowe?” God, I love my wife – in true stereo, fake stereo, mono, you name it.

3 Responses to ““The Fool on the Hill”…In True Stereo”