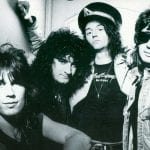 Last weekend, I got a little bored with my Spotify playlist of about 1000 songs. It was a glorious sunny day here in Vancouver and I decided to expand the music I had by picking an artist I liked but didn’t have much of in the playlist.

Well, the first artist that came up was The Georgia Satellites. So I pulled up their greatest hits, then each individual album. Now maybe it was the two or four extra large Sapporos or the hot weather, but I couldn’t find a song I didn’t love. By the end of an hour of listening to the band exclusively, I had concluded that they were right near the top of GREATEST AMERICAN ROCK BANDS EVER.

So, my question to the newly regathered Rock Town Hall citizens is. “Was it the beer talking or not?”

6 Responses to “The Georgia Satellites vs. Sapporo beer”