Do the math. New York rock ‘n roll primitives The Fleshtones have been in existence since 1976! Although I knew they dated back to the late-’70s and Marty Thau‘s old Red Star Records label, I didn’t have them pegged back quite so far as 1976 and the legendary New York punk scene of CBGBs, Max’s Kansas City, etc. To me they were pioneers of the second wave of garage rock that would blossom in ’80s underground rock circles. When I first saw the band at a small club in Chicago in 1981 or ’82, it was the closest I would get to stumbling across an actual Yardbirds- or Animals-inspired American ’60s band off the Nuggets compilation. They were sweaty, in-my-face exciting that night as singer Peter Zaremba swiveled his hips and swung his young Mick Jagger-style forelock over the crowd. Skinny guitarist Keith Streng rode his twangy chords and guitar riffs for all they were worth. He wore a turtleneck under a wide-collared shirt with a medallion to boot! Drummer Bill Milhizer and founding bassist Marek Pakulski laid it all out, implying nothing, avoiding anything remotely tasteful or subtle in their rhythms. Townsman Slim Jade wrote about our youthful attempts at defining ourselves through rock ‘n roll styles the other day. The Fleshtones really spoke to my initial efforts at becoming a new version of myself freshman year in a city far from home. My friend and I managed to get backstage after the show. We partied with the band. They seemed much cooler than us, but they were incredibly approachable. Shoot! Maybe, I thought, it wasn’t that far of a stretch to get a few notches cooler.

I saw The Fleshtones another 4 or 5 times through the ’80s, then lost touch with their activities. They were always a guiding light for me and my friends and our own band. It was always cool to know they were keeping things going as my friends and I kept our humble vision alive. Rock ‘n roll offers so many opportunities for community. That’s not to be missed or overlooked, no matter how frustrating any number of larger scenes may be. In chatting with Peter Zaremba the other day it was clear he and his mates are keeping things in perspective, doing what can and what needs to be done. Playing their patented brand of Super Rock. Taking it to The People in small clubs as they have always done.

Rock Town Hall: We interviewed Lenny Kaye just last year, but I did not know about your 2011 album with him, Brooklyn Sound Solution. The album sounds cool. How did he come to work with you?

Peter Zaremba: We’ve been admirers of Lenny’s since before Nuggets. He put together a compilation of Eddie Cochran stuff in the early ’70s that my friends and I thought was fantastic. When the Fleshtones finally got together, the first ‘cover’ we ever learned was “Nervous Breakdown” from that LP. Fast forward, we got word through mutual friend Phast Phreddie Patterson that Lenny really dug the band and would love to record with us—do some stuff that he couldn’t do with Patty. Of course we said yes!

RTH: Your “Super-Rock” sound and show can’t miss live. What does it take to capture it on record?

PZ: When you find that out, tell me. We’ll make a million bucks! Actually, it seems we look at our recordings a bit different than our “shows.” The show has the visual element, kinda like a “distraction” as used by a slight of hand artist or magician. You can get away with a lot when there’s so much going on. Now a record, you just sit and listen to. We’ve grown up listening to records and realize you have all sorts of opportunities to create whatever sounds you want. It’s a different thing entirely.

RTH: Did you fit in as you came about during the golden age of the CBGBs punk scene? In retrospect you seemed to be kind of “retro before your time.”

PZ: We really didn’t fit in, but I think we were more a taste of what was to come than a lot of what was considered “cool” at CBGBs at the time. However, we did fit in with the Blondie bunch, and oddly enough Suicide recognized us for what we were—distilled rock and roll, just like they were. The Johnny Rotten poses got old—quick.

RTH: Did that matter to your peers, critics, the scene?

PZ: Except for what I just said, I guess it did matter. We are pretty much written out of the history of that era.

RTH: How did your old MTV gig come about, as host of The Cutting Edge? How open was the network to your style and vision?

PZ: We were signed to IRS Records, who produced the show for MTV. We had appeared on the show already a few times and when the host decided to go to Fiji on an art grant (who wouldn’t!?!), they offered me the job. I took it. At first MTV didn’t care what we did, but when we became the highest rated “special” on the network, they really changed their minds! They wanted their hour back, and then tried to copy our formula with 120 Minutes. People are forever telling me how much they loved my show 120 Minutes! Anyway, we were the orphans of the network, even with our high ratings. I never get any acknowledgment from MTV, or invited to any of their anniversaries or events. It’s as if we never existed.

RTH: Have you ever done another solo record or offshoot record beside your old Love Delegation album? How did that come about?

PZ: No, The TWO Love Delegation LPs were enough to cure me, although I wouldn’t mind doing some sort of solo LP that would be 100% different from what we do in the Fleshtones. That takes money! How did the Love Delegation come about? Are we writing a book here? Lets just say that the Fleshtones were between labels at the time, we were in the middle of the Pyramid Club scene, with all of that incredible talent, energy and crazy ideas, and I had piles of material that I wanted to use.

RTH: The Fleshtones have endured for more than 35 years, doing your own thing, your own way. Is there an old record or artist the band taps into to help keep the faith?

PZ: At this point, we are our own inspiration, and for others!

RTH: Have you ever been tempted to veer off into some new direction? Have you or Keith had to put aside any stylistic urges for the good of the band? For instance, is there a closet prog rocker in the band?

PZ: I hope there isn’t a closet prog rocker in the band. You’d think I’d know if there was by now, but you never know! We love basic rock and roll. There’s a lot you can do with that. No big changes.

PZ: Ours! But I’m starting to comb mine back finally—sort of like Moe Howard did in the later Three Stooges shorts.

RTH: Is there a kryptonite to the Fleshtones’ Super Rock?

PZ: You mean something that can destroy our powers? Shhhhhhhhhhh…

RTH: An important question I like to ask most of our interview subjects: Which version of the Rolling Stones do you prefer – Brian Jones era or Mick Taylor era?

PZ: Well, they really didn’t let Mick do much except appear in the photos, and fill in a bit on stage. Even Let It Bleed seems to have more Brian Jones on it than Taylor. So, I’ll say Brian Jones, even though he was thoroughly evil (and sadly pathetic—BUT brilliantly talented!). But I really like the LPs the Stones put out in the Taylor era. I’m a fan!

RTH: Anything you’d like to note that’s coming up for the Fleshtones? Do you have any new recordings in the works?

PZ: Glad you asked. Our first all-Spanish language EP, Quatro X Quatro—Los Fleshtones, will be out later in the summer. I love it. Then we are due to record a new LP really soon. I for one, can not wait!!!!! Thank you! 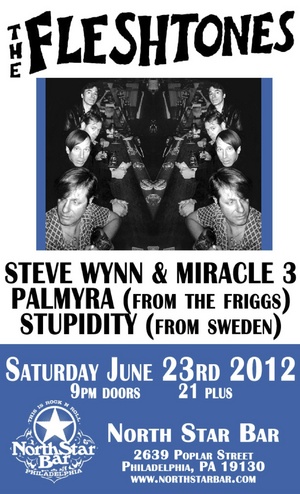 4 Responses to “The Rock Town Hall Interview: Peter Zaremba on The Fleshtones, MTV, and Historical Rewrites”