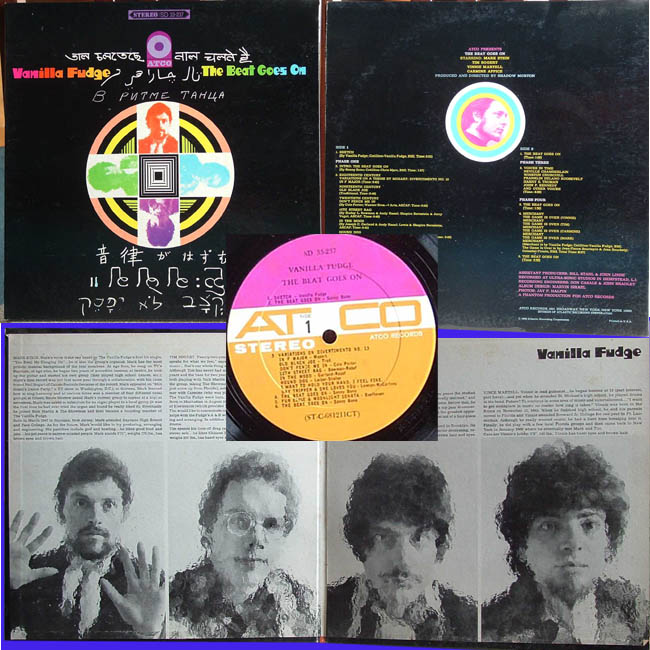 “When the crescendo comes up during a song, I lose myself in it. I feel I’m making love to the audience. The sound fondles them, taunts them. grabs at them, embraces them.” — Vanilla Fudge keyboardist Mark Stein, from the liner notes to the Fudge’s 1968 concept album The Beat Goes On

Fellow Townspeople — I went out on a particularly fruitless thrifting expedition today; so fruitless, in fact, that I had to resort to buying an album solely because it looked like the single most colossally pretentious turd ever unleashed on the record buying public. And it was! This Vanilla Fudge album — The Beat Goes On, from 1968 — is astonishing in its badness, even for a Vanilla Fudge LP. Its awfulness is almost surreal. It may in fact be the worst album I’ve ever heard.

The basic idea, if there really is one, involves slowing down the Sonny Bono song from the title to a dirge-like pace, splitting it into six pieces, and filling groove space between these 6-minute-long snippets with brief, partial covers of music by artists ranging from Mozart to The Beatles — interspersed with pompous, idiotic interview segments with band members and lengthy audio montages of famous speeches by politicians from the 20th century, and the occasional sitar raga. Yes, I’m serious.

I’m sure you’re eager to hear some of this. I’m afraid I cannot indulge your macabre curiosity. If I were to rip and post this album here, I might be responsible for single-handedly upsetting the fundamental, universal balance between musical good and evil, and unleashing armies of winged demons wearing Bad Company T-shirts upon the world. The gates of hell would burst asunder, and with a giant retching sound, the rock netherworld would give up its glassy-eyed, greasy-haired, bongwater-soaked rock undead to assault and terrorize the planet. It’s just not worth it.

Sorry, guys. Trust me, I’ve got your best interests at heart here.

5 Responses to “The Worst Album I’ve Ever Heard: Vanilla Fudge’s “The Beat Goes On””