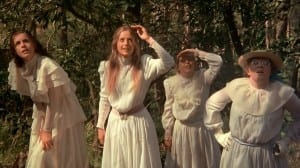 Anyhow, during the introduction to one of these Weir films the series’ host, Jackie Weaver, the Australian actress who played the Philadelphia mom of Bradley Cooper’s Silver Linings Playbook character as Edith Bunker (a topic for another day: when will a Hollywood film get an actor to play a Philadelphia character with an actual Philadelphia accent) mentioned Weir’s 1971 short film, Three Directions in Australian Pop Music. Having dug the Aussie rock from that era that I stumbled across a few years ago (and I’m still looking for a killer comp of that stuff, if anyone has a recommendation), I had to track this short film down. Thankfully, someone had posted it on YouTube. The following directions in Australian pop music were, for the most part, left uncharted. Thankfully. See what you think…after the jump!