Mr. Moderator is nothing if not zealous in his efforts to protect the hallowed Halls of Rock from assholishness. [Mod. – Hey, some days I think I promote just that!] One of Moddie’s first defensive bulwarks in this effort is an understandable reluctance to let folks post images and sounds without extensive monitoring and assistance. [Mod. – Ugh!]

Well, folks, after much lobbying and assuaging of doubts, I finally managed to convince our Moderator that it would be in the Hall’s best interest to at least allow me to post my Thrifty Music series without requiring extensive interactive assistance from Mod and The Back Office. [Mod. – Bravo!] (Posting a Thrifty Music comp actually takes a lot of time and quite a bit of work, people… y’all bettah recognize!)

Anyhow, my first order of business upon being granted these limited powers of postage has been to make sure I know what the hell I’m doing before setting about finally delivering Volume 8 of the Thrifty Music series. So, naturally, I thought I’d share a couple of the most heinous rejects from my bin-scouring efforts. If this experimental post makes it through the ether successfully, I shall undertake to bring you the next couple of Thrifty Music comps quickly and with meticulous attention to quality. 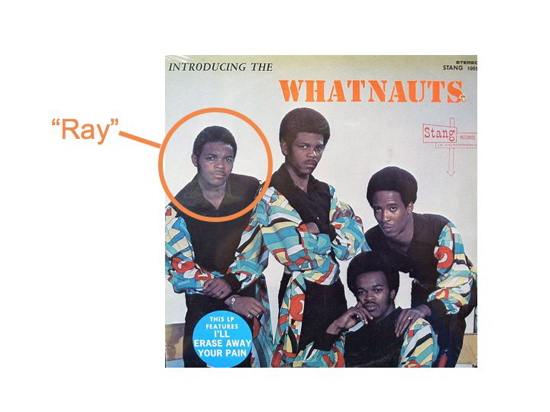 The Whatnauts — and “Ray” — will erase away your pain

The Whatnauts, “I’ll Erase Away Your Pain”

First up in this experimental collection: “I”ll Erase Away Your Pain,” by Baltimore’s The Whatnauts. When I first slapped this grimy 45 onto the turntable, I was quite taken aback by the sheer weirdness of the song. Who greenlighted this project?! I mean, to achieve some measure of success in popular music, don’t you need to at least offer a hummable melody, or a catchy hook, or something? This song is structured so strangely that even the skip/scratch at the top of the number seems to make no difference to its melodic “flow.” Note also that — while I try to refrain from simply regurgitating intelligence I gather from the InterWeb on my Thrifty Music subjects — I have to share something I found on a site called musthear.com, describing the band’s line-up: “Obscure beyond reason, the Whatnauts were comprised of Garnett Jones, Billy Herndon, Gerald “Chunky” Pinckney, and a guy identified only as Ray, who disappeared after this album.” More power to ya, Ray! The next best thing to The Oneders’ T.B. Player! 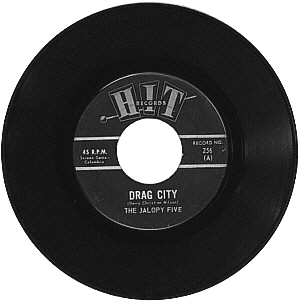 50 gold piasters to the man who can find me a photo of the Jalopy Five!

Secondly, as a heartfelt “thank you” to all the RTHers who wasted our time so admirably on that embarassingly geeky “What if the Beatles were food?” thread, I offer an interesting take on “Nowhere Man” by HIT! Records’ own Jalopy Five. Pay careful attention to the dulcet tones of the Jalopies’ backup harmonies, and their guitarist’s effort to reproduce Harrison’s lead in the middle. Ahhh… the ’60s. A glorious era of pop music genius!

So, even for this experimental post, now is the time ask my usual probing questions of you, the listener. They follow below:

1. Poor “Ray” — his contributions to the Whatnauts are sadly lost in the mists of rock time. But was he the Whatnauts’ Stu Sutcliffe or just their Pete Best? And while I’m asking questions around here…Which long-lost “original band member” from a fave band of yours do you wish would make a triumphant return?

2. I’m still laughing at that Jalopy Five cover — but now I’m chortling at the fake Liverpool accents the band adopts for maximum Beatle-riffic effect. Question: Other than fake American and British accents, can you think of any other fake ethno-linguistic affectations in the world of rock?

11 Responses to “Thrifty Music, Vol. Minus One: Unbelievable Shite”