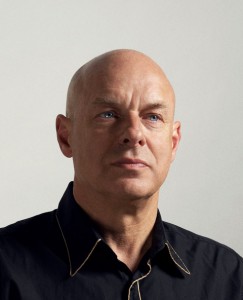 Fresh as a daisy?

I don’t know why, but recently it occurred to me that Brian Eno may give off the most pleasant odor of all rock ‘n rollers. Although early photos of him find him in poses worthy of Channel and other great perfumiers, I doubt early Eno smelled anywhere near as fresh as I imagine modern-day Eno to smell. By some accounts I’ve read young Eno was living on the edge. Despite a likely liberal use of artificial fragrances that would rival those of the protagonist of Huysmans‘ Against Nature, he probably reeked of smoke and groupies’ sweat.

It’s the early ’80s Eno, the ambient Eno, the Talking Heads‘ producer Eno, who I imagine developing advanced bathing techniques, extracting herbal oils, and even modifying his diet to ensure an around-the-clock, seasonal blend of pleasing, understated aromas. A morning ritual of, say, a rosewater bath, a dab of rosemary oil behind each earlobe, and a light brunch of fennel and braised squid before heading off to a day’s recording with U2 may have added as much to the magic of the band’s sessions for The Unforgettable Fire as Eno’s Oblique Strategies deck of cards. Eno probably kept a pot of chamomile tea steeping at all times to help drown out the more, uh, pungent odor of engineer/coproducer Daniel Lanois.

I bet Chris Martin of Coldplay appreciates the ambient scents that Eno brings to a session. A dank, musty studio is no place for Gwyneth and the kids to drop in. The girls love it when Eno smells like a chai latte.

So, I’ve made my case for Brian Eno as the Rocker Most Likely to Give Off a Pleasant Odor. Can you think of any other rocker who may smell even more delightful?

22 Responses to “Which Rocker Probably Gives Off the Most Pleasant Odor?”