Before or after reading this brief post, please click on this link to watch The National perform live on The Tonight Show. Thank you. 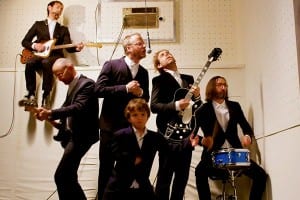 There are times when even I have trouble mustering the energy to keep the Halls of Rock open for business. Our online culture and community have changed. Our daily crew of hearty participants has thinned out. I’ve got a half dozen other projects that have been keeping me busy. Sometimes I get sick of complaining, or what seems like complaining as I rail against the injustices in rock critical thinking. Then I see something like The National perform live on The Tonight Show. Then I regain the strength I need to do my part to keep Rock Town Hall chugging along. Here’s what I’m talking about…

I recorded this episode of The Tonight Show last week, for a piece a DVR-less friend of mine is writing. Having remembered thinking the first album by The National was “pretty good, for that kind of thing,” when I heard it a few years ago, I was curious to see what I thought of the band now. The choir/string players positioned in the back right corner of the stage gave me pause. I’ve been sick of that shtick since the ’90s, when it seemed every grunge- and hair metal-rooted band from the late ’80s with a shot at a national audience as their initial run of success was about to run dry incorporated a platoon of swaying, 100% black cotton-clad, long-haired women to graciously saw away at their acoustic stringed instruments while the featured artist did their usual thing, maybe augmented by an Oliver on keyboards or mandolin.

I was right to have taken pause. As the camera panned across The Tonight Show stage and the song by The National never gained any steam I counted 11 musicians (Ee-o-leven musicians! as the late, great Phillie broadcaster Harry Kalas would have said), including Mr. Hunt-and-peck on synth and a guy standing right alongside him who did nothing but tap a tambourine with a trumpet hooked on his left arm. I kept waiting to see what the tambourine-trumpet player would do to earn his keep. Eventually he took the trumpet off his arm and blew along for a few measures with the riff the string section already had covered.

The song never went anywhere, despite a couple of cool guitars and a singer who actually has the ability to sing in a rich baritone that is not my cup of tea but is pleasing in its own way. (The singer, by the way, might want to try opening his eyes once in a while.) Eleven musicians, each presumably earning a paycheck, to make the sound 3 or 4 musicians could have done for a third of the payouts. What’s the point? It’s the same feeling I get when I see The Arcade Fire, who employ about 15 musicians playing exotic instruments from around the globe. What the result? It usually adds up to what sounds to me like a 4-piece song by The Cure. I’m all for friendship and community building, but do you have to drag your extended group of friends on tour with you? What is the point?

8 Responses to “Why Rock Town Hall Must Chug Along!”