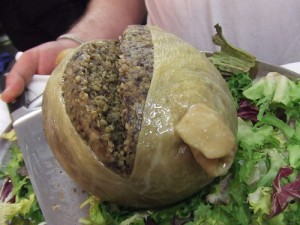 Tonight is Burns’ Night, the anniversary of Robert Burns‘ birthday, a poet whose work was written in Scots dialect and is largely incomprehensible to anyone reared outside of that beautiful country’s borders. For example, his poem “To A Mouse” begins:

It is big business north of the border, the culmination of all of the eating and drinking training that has been put in over Christmas and New Year; here in England it is more often than not overlooked unless it is a very slow news day, in which case the telly will be taken over by burly men in kilts explaining why it matters, generally with the benefit of subtitles for the nesh southerners. I am not proud to admit that I know little of the poet’s work, or his life, other than that he died young and that enough wee drams are sunk in his honour to keep the majority of Scottish distilleries in business the whole year round.

Many cultures enjoy a national dish which as soon as they are able to exercise sufficient mental dexterity to poke a nearby animal in the eye with a pencil they are sworn to a solemn promise under pain of losing their place in heaven that they will never admit to any other human being is completely inedible, but which on at least one occasion a year they have to force into their mouths and keep down. These are usually meat-based, and if ever I am faced with them I thank my secular God that I decided to become vegetarian when I left home.

The people of Iceland enjoy the delicacy known as Hakarl, which is shark that has first been buried in sand for 6 to 12 weeks to “ferment” (or “rot” as non-Icelandic people generally describe it), and then dug up again, cut into strips which are hung out to dry for several months. It is washed down with Brennivin, which is schnapps made from potato. A friend and I went to Iceland on holiday many years ago and I have not forgotten the sensation of drinking Brennivin: it is as close to pouring white spirit down ones throat as I ever hope to experience.

On Burns’ Night the people of Scotland enjoy the Haggis, which to a faint-hearted vegetarian like myself appears to be a huge bloated sausage constructed from parts of animals that even Ozzy Osbourne would hesitate to put into his mouth, bulked out with horse food and whatever is left laying about, served with neeps and tatties, which is mashed swede and potato, presumably so that those who are not drunk have something on their plates which they are prepared to eat.

I have found a recipe for a “vegetarian haggis,” which contains ingredients that I not only recognize but would be prepared to put into my mouth, and thought that I would share it…after the jump…with the Hall, in case anyone is stuck for something to cook this evening.

To get you in the mood, here is a clip of Dick Gaughan playing his arrangement of a Robert Burns poem, “Now Westlin Winds,” which presents the work of the poet in a form which I can understand, and is actually rather beautiful. When he plays it live, he says that he believes it says everything that one needs to know to get through life. I’m not saying whether I agree with his analysis, but it is rather beautiful.

I’ve seen Dick playing several times over the years, he played a blinding set in the function room of a pub in Northampton recently and afterwards I had the pleasure of exchanging a few words and shaking his hand. To say that he is imposing in the flesh doesn’t even begin to describe him, he’s a big bloke and stands as solid as a huge Scottish castle, impregnable against whatever hundreds of years of Highland weather is able to chuck at it. He plays his guitar as if he’s wrestling with a medium-sized sheep, and the noise that comes out of it as he plays is astonishing, barely requiring any amplification in even quite a large room, and he deserves a good deal more fame than has come his way.

Also hailing from Scotland, but by way of distinct contrast, Ivor Cutler was a very slight man, who started his working life as a teacher and progressed to ekeing out a career as a poet and performer, accompanying himself on the harmonium, with regular sessions for John Peel, the occasional radio series, and an appearance in the Beatles’ Magical Mystery Tour, all of which I remember being puzzled by until eventually realising that it was meant to look and sound like that.

His shows were extremely minimalist and very quiet, and very, very funny. I used to visit a friend regularly in Camden Town in London and several times saw Mr Cutler (as he insisted on being addressed) riding through the dangerous London traffic on an extremely elderly and far from robust bicycle while wearing a tea cosy on his head. I miss him a good deal, and think that there is probably room in the calendar for a very quiet gathering, a vegetarian (as he was) tea party perhaps on his birthday, the 15th of January, in honour of Cutler Night.

13 Responses to “A Burns Night Celebration”