I suspect I have been to/go to far fewer concerts than most of my fellow RTHers. And I’d guess I’ve seen far fewer acts as I tend to see the same folks over and over.

Still and all, I’ve seen some shows that I think would inspire envy: Springsteen from second row center at the Tower in December 1975; Dylan’s 4-hour club show at Toad’s Place in New Haven; Beefheart, Talking Heads, and Costello in the very early days; Sinatra a couple of times…

But 2 weeks ago I saw what may have been the best concert in my life. which I suspect many of you won’t believe; I can hardly believe it myself. I’m talking about the Beach Boys’ 50th Reunion Tour.

First, the back story. (I’ve told some of this before but can’t find it to provide a link; maybe it was back in the RTH v1 days.) My kids are Beach Boys and Brian Wilson fans from back in the day when I could control the radio dial / cassette player / CD player in the car. We listened to oldies and Brian and the gang naturally figured prominently. So they’ve known the classic BB songs since they were toddlers.

In 1997, I took my daughters, then ages 9 and 6, to see the Beach Boys (of course without Brian but with Carl, who was only to live a few more months). It was the first time I had seen them as well. It was a fine concert that the girls absolutely loved. They sang along, danced in the aisle and still talk about it 15 years later.

In 1998, when Brian was promoting Imagination, he did a signing session at Borders in downtown Chicago. I took my daughters and my then-18-month-old son to meet Brian.

My daughters had been listening to and loving the Imagination album and were excited to meet Brian. We drove 2 hours into Chicago (we lived 35 miles northwest of the city but 2 hours wasn’t unusual for that trip), then waited 45 minutes in line. My daughters, in anticipation of meeting Brian, had drawn a poster for him. It contained little pictures depicting each song from the album. When it was our turn, they presented their original poster to Brian, while I explained what it was. Brian, sadly, didn’t acknowledge the poster or my daughters or son or me at all. He kept his head down, scrawled his name on the copy I had had made, and that was it. On the way home, my 7 year old, bless her heart, said that the whole thing was kind of disappointing but still she was glad that we went and she had the chance to “meet” Brian. (To add insult to injury, 6 years later his Getting in Over My Head album had a cover with little pictures depicting each song. I’m not saying he stole Kate & Rebecca’s idea, I’m just saying…) 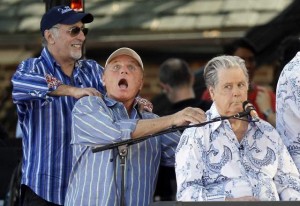 "You scratch my back, I'll scratch Brian's."

That 7 year old is now 21 and spent the last school year at St. Andrew’s in Scotland. When she read about the reunion tour she sent off an e-mail to the family saying we had to go. Kate joined in on the request as did Matthew. He had no memories of the Chicago signing but he’d heard his sisters talk about that and the concert enough to be jealous so now he wanted his chance as well.

Kate now lives in Baltimore and, as it happened, the reunion tour was playing 20 minutes from her in Columbia, MD on June 15, the Friday of Father’s Day weekend.

It took a lot of internal monologue for me to convince myself that we should do this. $270 for 5 lawn tickets seemed like an awful lot for what I was sure was going to be a train wreck (and no way was I going to go 7 large for covered seats). But I decided what the heck, at least it would be a fun family outing and another memory for the kids.

In the lead-up I watched the Boys on Kimmel and Leno and watched a few YouTube videos of the early reunion shows. They were horrible. Brian was his usual deer-in-the-headlights mannequin in front of prop keyboards. Mike Love had no voice left. Vocals were clearly being doubled and tripled. And there were so many missed notes.

Well, June 15 came and it was certainly a perfect night for an outdoor concert. Comfortable temperatures, no bugs, lawn seats that were close to the end of the covered seats and right in front of a large video screen.

And you know what? From the moment they hit the stage to “Do It Again” it was close to perfect. Mike Love’s vocals were strong and there were precious few smarmy comments. David Marks played some nice restrained surf guitar licks. The backing band (a combination of the Mike & Bruce touring band and Brian’s Jeff Foskett/Wondermints band) was fantastic. Close to 50 songs spread over about 3 hours. All the hits and a few rarities, and the only real head scratcher was “Ballad of Old Betsy” (look it up). Nice video tributes to Dennis and Carl (each “taking” a lead vocal via video with live backing; no holograms).

And even Brian came through. Yeah, for most of the show he was a mannequin. And he missed a lot of notes. But there were two moments that were transcendent. “I Just Wasn’t Made for These Times” was unbelievable. I know there are those who think back story isn’t supposed to matter but knowing what Brian has been through and hearing him sing his soul out in a battered voice was so so good. And if anybody else said this I would totally dismiss it, but those missed notes on this song fit in just perfectly. And then he led the band for “Heroes & Villains,” singing the lead, directing everyone else, vocals and instruments, gesturing, and totally there. And I thought “This is what it would have been like if I could have been in the studio when he was recording Smile.”

So, was it really the best concert I ever saw? Well, on an absolute basis I can’t say it surpasses many other shows I’ve seen but on an absolute basis it was a fantastic concert. And compared to my expectations it surely had the largest gap between what I was prepared for and what was delivered and so in that respect it was the best. It was so good I sure wish I had spent the $700 for seats close to the stage!

And the better half and the kids just absolutely and totally loved it, from the opening note to the last; only if Uncle Jesse – John Stamos – had been there would it have been better for them. And so as a dad – on Father’s Day weekend no less – it was great for me to share music that I love with the family and create memories that will, I’m sure, be enjoyed and discussed long after I’m gone.

So, have any other RTHers seen this reunion? What did you think? (Back in the RTH v1 days there was someone – Christian? [Mod. – Yes, a close, personal friend of HVB.] – who was a big Beach Boys fan. If he’s on v2 he’s a lurker, but I’d love to get his comments).