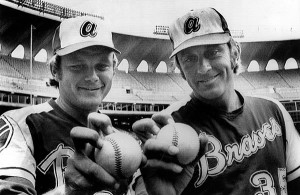 Phil and Don? No, Phil and Joe.

So much sad and disheartening news floating around on my longer-than-usual evening browse through Facebook tonight: Bobbie Smith of The Spinners died. I grew up loving that band. Just this evening, in fact, while driving home from a long client presentation through a wintry mix on the New Jersey Turnpike, one of their songs came on the radio. That’s right, I was listening to sports-talk radio, got sick of hearing people talk about stinking college kids wearing t-shirts under their tank tops and their basketball tournament, which dudes who barely graduated from high school foam at the mouth over in hopes of winning $200 in an office pool. I hate the sight of college basketball players wearing of a t-shirt under a tank top. It’s not right. It’s sad. It’s like watching fat kids in the pool with a t-shirt sticking to their fat rolls. Who are they kidding? You’re playing basketball, kid: wear a tank top! (College football players don’t know how to wear their uniforms either, with their exposed calves…It’s even extended to the NFL, with the whole sleeveless Look. Come on, man, I want to watch big men pound each other as much as the next guy, but I don’t want to see a 360-pound lineman’s fat rolls being squeezed out from his armpits.) Anyhow, I got sick of the March Madness talk and flipped through the couple of music stations I have saved. The Spinners played, and I sang along to whatever old Spinners tune it was the oldies station was playing. (Next they played “Girls Just Want to Have Fun,” and I bailed. That’s not an “oldie!” That’s the musical equivalent of a t-shirt under a tank top.)

I also read that a guy named Jason Molina died. The name rang a bell. At first I thought he was one of those bearded, mediocre folk-rock dudes who manage to appear on The Tonight Show and other major outlets despite seeming to have generated no organic buzz. Like that Ray Montaigne (sp?) guy. His music’s all right, but you’re telling me there aren’t 2 bearded, mediocre folk-rock dudes in any music scene who couldn’t draw the same amount of people to a club as him? What do I know? Upon further investigation I was reminded that Molina was the man behind Songs:Ohia, an actually good folky band I first learned about through a contribution to a tribute album on which my band appeared. I thought their contribution was the strongest of the batch. This story was especially sad, sadder than the fat kid jumping into the pool in his sopping wet, skin-tight t-shirt. Molina was 39 or so. His body gave out from drinking.

In contrast to these stories I took a modicum of delight in news that Michelle Shocked spouted off on some hateful anti-gay rant at a recent show in San Francisco, I believe. She declared that “God hates fags,” or something like that, and expressed a fear of gay marriage. Much of her audience walked out. The club shut down her performance, and 8 of her next 11 scheduled venues canceled her coming appearance. My mild sense of delight was in no means related to the content of her shocking new beliefs but in the fact that I never liked her music, her entire schtick, and all the people who bought into that schtick in the mid-’80s or so. She was at the fore of a wave of “serious” artists whose stance seemed to be way more important than their music. Too many of those artists struck me as being props for people who couldn’t take a stand of their own. It was “package-deal” music. “I’ve got no beef with homosexuals,” God said when informed of Shocked’s comments. “I simply never found Michelle’s music that interesting.”

The musical discussion that really made me stop and think, however, came from Crystal, the wife of a Townsman, and a former contributor herself, in fact. I hope she and her husband don’t mind me reposting her status:

Quick! Think of a song that makes you happy. Putting together a playlist for someone. I’ll start, Joan Jett’s Bad Reputation…

I wanted to chime in and play along, but you know what? I’m not sure that any song actually makes me “happy.” All the favorite songs that came to mind that make me feel the wonder of life and the cosmos, or whatever, inevitably make me feel a little sad as well. Not sad in an I’m-drinking-myself-to-death way or even sad like the kid in the pool in his t-shirt, but a little sad at the knowledge that the beauty of the song I’m hearing cannot last forever. Maybe it’s like that orgasmic state some French thinker dubbed la petite morte.

This past Sunday the over-35 men’s baseball team I joined with 16 other guys from my town had its first outdoor practice after a few weeks of indoor batting and pitching practice. We’ve played a Fathers Day game for fun the last dozen years or so, and this year the organizer of that game suggested we join a real league, playing 17 real hardball games. It was sunny at 9:00 am but only 34 degrees. For the first time ever I wore a batting glove on my glove hand while taking fielding practice. As a kid I never wore batting gloves. I thought they were wimpy, kind of like wearing a t-shirt under a basketball jersey. I don’t have the callouses I used to have, so I’m now wearing batting gloves. After an hour of fielding practice we split up in teams and played an intra-squad scrimmage, just a couple of innings. I got to pitch!

As a kid, control was never my thing, neither physical nor emotional control. I was the wild left-hander who would gesture at the umps, stomp around the mound, and occasionally manage to get kids out solely because I was left-handed, kind of crazy, and fearless. I wanted to be nasty and over-powering like Bob Gibson, who flew off the mound after every pitch. I was merely nasty and incapable of following through without falling toward the third base line. I never had much stuff.

As I got older and fatter and calmer, I realized I could throw a decent knuckleball, better than the knuckleballs other guys in their 30s could throw while having a catch for fun or warming up for the yearly Fathers Day game. When I turned 40, my wife and the wife of Andyr sent the 2 of us to Phillies Phantasy Camp, where we spent 4 or 5 days doing nothing but playing baseball under the watchful, ball-busting eyes of phavorite Phillies phrom our youth. It was a blast, and my half-decent knuckleball did the trick more often than not. It also generated a lot of laughs, which was a relief, because I was afraid my teenage hothead self would re-emerge in my then-40-year-old body. The knuckleball is a tremendous pitch for the aging baseball player. It’s probably the sports equivalent of musicians who get into playing the ukelele or country music or some other “timeless,” stress-reducing instrument or style of music. I’ve yet to discover my musical knuckleball.

Skip 10 years later to Sunday’s scrimmage: the catcher wanted to go over the signs with me. “You’ll recall,” I told him, “I don’t have a lot of stuff. I’ve got my fastball, which is no longer that fast; my knuckleball; and a split-fingered change, or forkball.”

“Do you like to throw the knuckler when you’re ahead or behind in the count,” he asked. I wanted to say, “When I’ll get the best laugh,” but I don’t know this man well enough to break out my idea of a joke yet. I do get a great sense from this guy: he reminds me of my Babe Ruth League catcher, who would become my first guitar partner, under my tutelage no less! That guy, Mike, had a general “catcher’s personality”: confident, a little bossy, but fun. He was the only catcher who could visit me on the mound and get me to calm the fuck down and have fun pitching. I looked at my new catcher and told him what was really on my mind: “I trust you. I’m in your hands. You call the game as you see fit.”

My first goal was to throw strikes, and throw strikes I did. The batters did their job, hitting the strikes: 3 singles in a row scored their first run. My catcher ambled out to the mound. “How about we start the next few batters with your knuckleball, try to screw them up early in the count?”

I was putty in his hands. Before he even put down his signal we both knew what was coming. I got the first batter after our talk to pop up a knuckleball to shallow rightfield. The second baseman couldn’t handle it, but that was cool. We are all old guys out there. That will be me drifting behind the first base bag or in the outfield soon enough. I started off the next batter with a knuckleball. He barely tipped it before tipping his hat to me for that crazy pitch. A couple of pitches later I struck him out on a knuckleball. I knew at that moment that no matter what else would happen that I would sleep like a baby, with visions of that knuckleball dancing into the catcher’s mitt. The next 2 batters, including their most feared hitter, lunged at knuckleballs and both popped up to the shortstop. If getting through that inning on pure slop wasn’t enough, I also went 2-for-2 at the plate, twice singling with 2 strikes on me. The early successes felt sweet, even knowing that they were setting me up for some spirit-crushing failure later in the season, when the games count.

I arrived home absolutely elated at the morning’s experience. Perhaps this is how my friend feels when she hears Joan Jett’s “Bad Reputation.” I still can’t think of a song that makes me feel as giddy as striking out my friend with a knuckleball did. Does that mean I love sports even more than I love music? Does that mean that I take music too seriously? Or life, in general? Regardless, 10 minutes after my triumphant return home to a wife and 2 sons who couldn’t care less about my on-field exploits the muscles in my legs just went dead, like guitar strings snapping. I’m still hurting. It’s especially hard to walk down steps. Last night I popped Tylenol like Tug McGraw did for weeks during the Phillies’ 1980 postseason. “I must have nothing left of my stomach lining,” I imagined myself saying with a straight face. I had to sleep with my left left propped up under a pillow. As I dozed off I imagined presenting “my” catcher with one of those over-sized knuckleball catcher’s mitts.