When a Townsperson sent in Blood, Sweat & Tears’ 1968 album, Child Is Father to the Man, I knew which Hear Factor CD would be staying with me. It’s well known around here that I consider the band’s version of “And When I Die” the song I hate most in rock. “Spinning Wheel” isn’t far behind. “You’ve Made Me So Very Happy” is another song I dread hearing. All that brassy bombast couched in Love Generation threads creeps me out. I like my share of velvet-jacketed ’60 bombast as well as my share of hippie music, but the Blood, Sweat & Tears I’d grown up hearing got the mix all wrong, and I hold them responsible for the similarly brassy, bombastic sound of the bands Chicago and Earth, Wind & Fire.

Before I gave this album even one spin, I tried to calculate whether it would be better or worse not having David Clayton-Thomas sing on this album. I knew this album was from their early period, when Al Kooper, was thought of as some kind of blues-jazz-rock visionary and still is in some circles that consider it worth talking to him about anything but his fortunate and vital role in Bob Dylan’s “Like a Rolling Stone”. Clayton-Thomas was the voice of these hits I grew up hating, but the specter of Kooper was no stroll in the park for me as well. As I’ve made clear, his work in merging big band sounds with pseudo-hippie rock crossed the line with me, a line that I grew up more than willing to toe with my cherished childhood collection of Joe Cocker records. Now that was some horn-driven hippie rock. Let it all hang out! No blackface routine and embarrassng oom-pa-pa’s from The Mad Dogs and the Englishmen. But I digress. 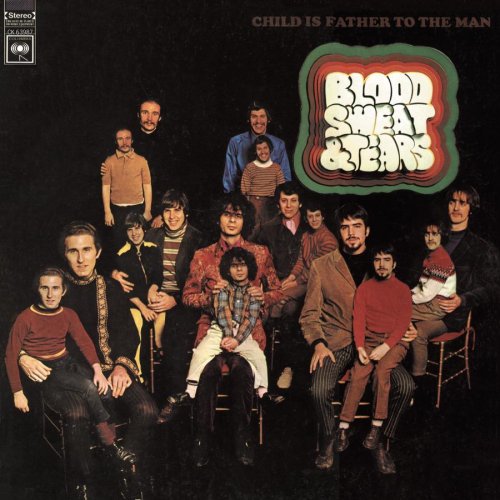 Child Is Father to the Man opens with an obligatory, for the times, “Overture”. To my surprise, it was a pleasant string-driven melody that was devoid of the brassy bombast I’d come to dread in the music of Blood, Sweat & Tears. I guess the overture has made a comeback in the last 10 years, with the spate of Elephant 6-related bands who feel the need to allow listeners a minute to settle in. Not bad at all.

With the first proper song, however, I got my first expected taste of BS&T. “Love You More Than You’ll Ever Know” opens with electric piano and white jazz-blues singing. In due time the song is punctuated by those big, brassy horn arrangements. Sweet Daddy-o, how I cringe at that sound! On Day 1 of my listening experience I wrote in my journal,

“Blood, Sweat & Tears must have helped a lot of high school band geeks feel like they were part of the revolution. And this must be the kind of music Paul Weller revisited to give him the strength he needed to start recording all those songs from his solo album that I skip,”

By Day 2 this song inspired the image of a greasy, pock-marked guy with a thin goatee dry humping a black Lycra-clad, halter top-wearing barfly on the small dance floor of a neighborhood bar. Thankfully things would pick up.

The next track, “Morning Glory”, begins with a fanfare that first makes me think Russ Tamblyn is going to grab the mic until an organ enters, which hints at the coda of the dreaded “You’ve Made Me So Very Happy”. Then, just when the worst has to come – when the vocals enter – rather than Clayton-Thomas’ typically deal-breaking, Tom Jones-baiting voice we get a gentle, pleading vocal, not unlike what you’d expect from some Goatee Rock band clad in maroon velvet and ruffled shirts. Quite an unexpected slice of cheese, and a welcome relief from my worst fears. When the band returns to it’s expected jazz-rock fusion on “My Days Are Numbered” there’s a similar, relatively soft touch that gives the song a bit more of a dorky hippie musical vibe than the dorky hippie Vegas lounge vibe of Clayton-Thomas-era BS&T.

On “Without Her”, the band displays an especially soft and deft touch with a Latin-tinged piano and mellow horn arrangements and very tender vocals. There are even true horn solos that are more in line with jazz than the honking we’ve grown accustomed to since the days of Little Richard singles. On Day 2 it occurred to me that these guys were squarely in the Goatee Rock camp when they first hit. There are many similarities to the Four Seasons’ absurdly enjoyable pseudo-psych album, The Genuine Imitation Life Gazette. Nothing to be ashamed of in that comparison.

So that’s how it went. There were times when the band slid into the future, such as on the horrible “Somethin’ Goin’ On”, which tipped its hat toward turd-dom by dropping 2 g’s in the title. Guess our taproom couple needs something to sway to. In short order, however, the band is back to tackling that all-important topic in late-60s “small rock,” the all-important “House in the Country”. Totally decent Goatee Rock. I’m shocked.

The question I ask myself at the end of this experience is, Am I a better person for having spent 3 days with this album? I would have to say possibly.