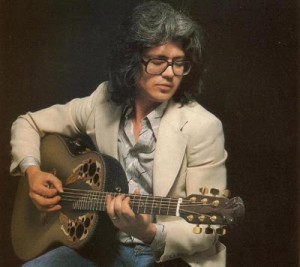 Larry Coryell, looking EXACTLY how an Ovation Roundback player was meant to look.

Mad props! to Townsman misterioso for sharing a link to the obituary for Charles H. Kaman, a pioneer in helicopter design and an all-around interesting man who also happened to invent one of the most dreaded pieces of musical gear, the Ovation Roundback acoustic guitar. Just thinking of that guitar makes me cringe.

My old guitar partner, Mike, used to have one of those things. Back in those days none of us had even a half-decent acoustic guitar, so when we needed an acoustic overdub on a 4-track demo, one of us would suck it up and play the Roundback. I hated the feel of that rounded, synthetic back against my inevitably sweaty belly. I hated the way the bottom of that guitar slid out, as if I was trying to play slide guitar or serve appetizers off the top of it. Seriously, if you click on no other link in this piece, check out this one! If that’s not going to alert the Rock Crimes Commission to the depth of this guitar’s societal ills I don’t know what will.

I thought the cutout and trim around the soundhole were wimpy. Now matter how you looked at the back of those things they were dog ugly:

Sadly, that synthetic roundback prevented them from being used for firewood.

I forgot the company also made electric guitars. They were also ugly, but this electric bass, for instance, is ugly in an interesting way. Their electric axes had funny names to boot!

One of the cool things to learn in Kaman’s obituary, beside the fact that he pronounced his last name with the accent on “MAN,” which might have been fun for his friends to say while offering him a high five during Ovation’s glory years (“Who’s ka-MAN?”), was that the Ovation Roundback dated back to the 1960s and was popularized by Glen Campbell. In researching this piece I’ve seen some cool ads for those hideous guitars, featuring ’60s country and folk artists, like Richie Havens, Janis Ian, and Mac Davis. Most of them (including a really cheesy ad featuring REO Speedwagon) were too small to bother asking you to click links, but squint hard and see if you don’t dig the copy for the Havens ad!

Despite spawning the age of hideous acoustic guitars, Kaman seems to have been a true guitar lover and good egg. Even his employees took an interest in their Roundback-loving customers.

46 Responses to “Inventor of the Dreaded Ovation Roundback Guitar Dies”