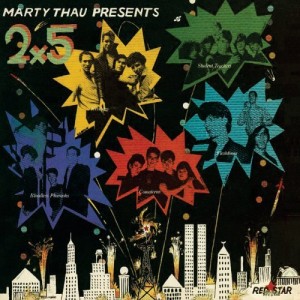 Although I’d known his name from the start of my teenage immersion in punk rock, thanks to the Marty Thau Presents 2×5 compilation album on his Red Star label, what always looked like a cool comp that I for—some combination of twisted, self-hating reasons—bypassed buying over numerous opportunities to do so, I knew almost nothing about the man, only that he had his hands in the start of the careers of a number of ’60s garage and girl group–informed bands of that era: The New York Dolls, The Ramones, Blondie, The Fleshtones… I wonder if he ever felt tormented by the success of his record biz peer, Sire Records’ founder Seymour Stein. Sorry, I’m projecting.

I’m sorry I never bought a copy of Marty Thau Presents 12×5. It would have been cool to own, if only for the contributions by Bloodless Pharaohs, Brian Setzer’s pre-Stray Cats, Philadelphia-based band, managed by Bobby Startup, the Philadelphia punk impresario  who was thanked on the back of the Stray Cats’ debut album and the terrifying (at least to my 17-year-old self), tattooed, gravelly voiced booking agent and DJ who somehow agreed to let the terrible high school band Townsman andyr and I cobbled together play at 2 of the clubs he ran, including an opening gig for Suicide’s Alan Vega. It was the open-mindedness of characters like Startup and Thau that occasionally allowed even the blind squirrels of the music world to find a nut. Or something like that. That’s the lesson I’ll take from the life of a Marty Thau.

According to one of the scant reports on his death that I’ve come across, Thau was working on a rock memoir at the time of his death. I’m looking forward to reading this excerpt on the mystifying Suicide, one of the band’s in Thau’s stable.

One Response to “Marty Thau Dead”