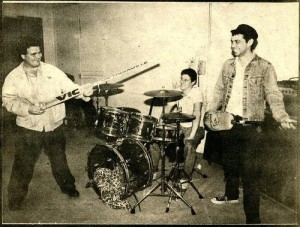 Hearing the music of Frank Zappa was probably my first exposure to this style of song construction. There used to be an advertisement for either the Apostrophe album or a coming Zappa tour on one of Philadelphia’s FM stations that featured that bit about not eating the yellow snow. There was some other excerpt about moving to Montana. Yuck, yuck, for sure, but those sort of lyrics were so far removed from what I’d been listening to! I ended up buying Apostrophe a few years later (actually I stole it, as part of the wild 70-album heist that a college friend’s old high school friend let us pull off in the suburban mall record store he managed), confirming for myself how foreign those snippets of lyrics first sounded on that radio spot. I got Captain Beefheart‘s Trout Mask Replica the same night I acquired the Zappa album. Beefheart pulled that trick as well, but his punchlines were usually completely absurd and delivered in a less self-conscious, ain’t-I-funny tone than what Zappa used. Beefheart and his crew struck me as truly weird.

American punk bands out of the loosely knit “hardcore” scene must have included a lot of Zappa and Mad magazine-loving jokesters. Their songs were loaded with punchlines, where the band would stop playing and the lead singer would utter some sardonic or self-deprecating quip. I’m going to depend on you, readers, to list your favorite punchlines from that scene and others. That stuff is still too foreign and uncomfortable to me to contemplate further than I already have. The practice itself, mind you, is not uncomfortable. My sense of discomfort derives from the shame I harbor over my inability to deliver a punchline.