Our friend and Nixon’s Head guitarist Jim McMahon passed on Tuesday morning. We hope the following “24-string salute” and link to one of the final recordings he did with us do some justice to the man. 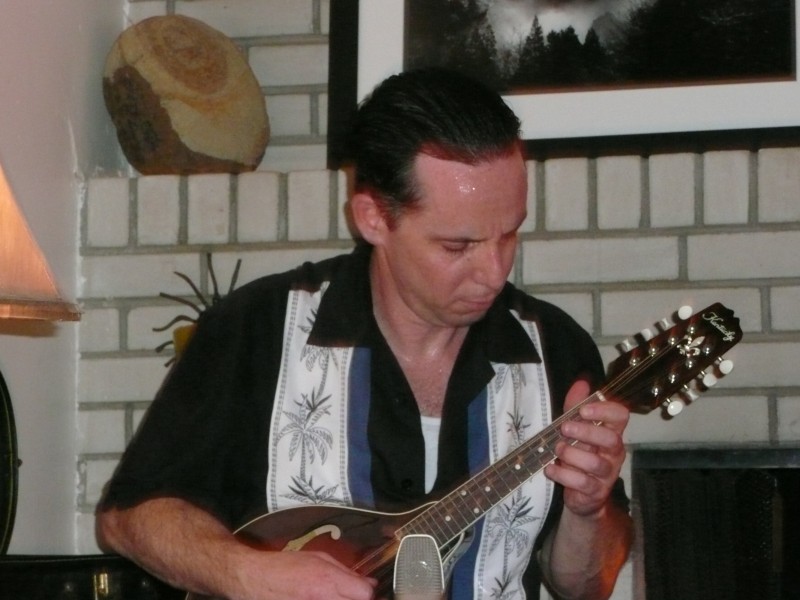 Jim McMahon making like the fadeout from “Maggie May.”

Our friend and bandmate Jim McMahon passed away Tuesday morning after a year-long battle with cancer. Almost a year ago to the day we received notification that Jim had been diagnosed. For a group of old music friends hovering around what we generously call “middle age,” this was chilling news. We knew Jim would face this challenge head on, fully prepared, and surrounded by loving friends and family.

No one in the band showed up better prepared to learn and record a new song than Jim. He was the first to arrive at my house for practice or recording session. “I hope you don’t mind me showing up early to set up and give my gear some time to breathe,” he’d say in his cheerful, slightly mischievous Philadelphia accent. Jim would carve out his turf in our tight space, begin unpacking his perfectly organized chords and effects boxes, and tell me about the characteristics he felt the guitars he brought might lend to our night’s work.

Jim owned a lot of gear and chose his artillery wisely. The rest of us were more focused on the aesthetics of his gear. We anxiously awaited the unpacking of his black guitar with the flames and the dice for volume and tone knobs. We dreaded the rare occasions he’d unpack a “pointy” guitar, something from his ‘80s metal-loving side. Jim packed what he felt the songs needed, not paying any mind to whether we were turned on by how an instrument looked. Often his hand-painted green Strat decorated with a big Woody the Woodpecker sticker would get the call. That was the first guitar we knew Jim by.

We were introduced to Jim through our mutual friend Dave Ragsdale, when one of our childhood friends and founding members suddenly “retired” as we released our second record. Jim was childhood friends with Dave. He came highly recommended. Jim’s first order of business was learning all the idiosyncratic guitar parts our friend had developed with us in the cocoon of our teenage band. A year or so later, despite Jim’s dedication to mastering our awkward, home-schooled musical language, the band was pretty much over; our teenage dreams were put on ice.

Seven or eight years later, having grown into real jobs, serious relationships, even families, the remaining original quartet re-formed along with Dorothy and another old music friend, for fun. Jim was living in Maryland at the time, He came back home and caught one of our shows a couple of years into this kinder, wiser phase. After our set he pulled us aside to argue that we needed his musicality to flesh out the broader landscapes we were attempting to capture. He quickly learned our new back catalog and began adding fluid lines that linked together our blocky “forearm rock” arrangements.

As we developed the Enemies List album, Jim was writing parts with us from scratch, not re-creating or expanding on another musician’s work. In the weeks leading up to a recording session, Jim would diligently soak in the impressionistic notes I’d send him via e-mail. My notes were loaded with references to specific guitar parts from obscure and popular songs and styles that my sausage fingers couldn’t play in a million years. Jim was the band’s resident Magic Fingers. No part was too ambitious to throw his way. He made any stringed instrument cry or sing: guitar, bass, mandolin…

For all the Jimmy Page–inspired flash and firepower he could put into the instrumental passages of a song like “Never Been Down,” his contributions to two other songs on that album stand out for me.

On “English Envy,” Jim drove home Mike’s ode to the England he never knew with both a driving, active Entwistle-worthy bass line and a mandolin part straight out of “Maggie May.” Always prepared, Jim first demoed his parts for review and approval, then knocked them out of the park in a handful of takes. I still remember the pointy, black metal bass he brought to the session that night. Just knowing something that ugly would appear on our record bugged me, but damn if it didn’t sound perfect, like one of those even more hideous Alembic basses John Entwistle used to get his distinctive sound.

On “Really Starting Something,” a characteristically in-your-face, 4-on-the-floor stomp I wrote, Jim provided what I feel are the most subtle joys on that record. While the rest of us are beating the arrangement like a dead horse, Jim plays a series of high-voiced chords that ring off in the distance. Like the licks he could play that I wouldn’t have been able to play in a million years, this simple part sounded, to my ears, like it was flown in from Neptune. All I asked Jim to do was find a way to “dance” around the rest of us. Listen closely in the right speaker: he’s like Fred Astaire in the middle of a Neanderthal tailgate party.

For the first song we recorded on our upcoming album, I asked Jim to prepare a guitar arrangement that would sound like Television’s Richard Lloyd jamming with the Some Girls–era Rolling Stones. As he set up that night he discussed his rationale for the two guitars he’d packed, the qualities he hoped to get out of his amp, and how the scales Richard Lloyd was known for playing might fit into our song. Much of what Jim was telling me went way over my head, but it was clear Jim had studied all the angles. Andy and Mike showed up, and the three of us sat in the control room while Jim went through his part. Again and again and again.

The first time he played the song’s theme, which he’d developed, he was well within range of nailing the part I’d imagined. If I could have played as well as him even that first time through I would have patted myself on the back, punched in a note or two, and called the take a “keeper!” That wasn’t Jim’s way. He was always chasing a more elusive take. He played countless variations on the theme and his key parts, rarely repeating a measure of what he’d previously played. For those of us in the control room, it could be frustrating. He asked for our feedback, but what did our feedback matter if he didn’t repeat the phrases we said were amazing?

“Do you want to save that take?” I’d ask him after what the three of us felt was a particularly strong take.

Eventually it became funny. We’d been doing this stuff together forever. We each had our odd ways at arriving at a common destination. Jim saved his fadeout solo for last. At least one of the other guys headed home at this point. Jim was locking in on his part, when something he played made me think of a particular passage from a Steve Howe solo in Yes’ “Roundabout.” By this point, Jim had been working on his lead guitar part for a few hours, but I didn’t think twice about asking him if he could work in a reference to a Steve Howe solo. I hummed out the segment of the solo and showed him where it might fit. Jim thought about it for 5 seconds.

“Oh yeah, I know that solo!” said our Eveready Bunny of a guitarist. He whipped off a note-for-note version of the Howe solo to prove it. Then he took about another 30 seconds to think about how that solo might be adapted to fit into our song. We “rolled tape” (digitally speaking) and within minutes he’d incorporated possibly the least-musically appropriate reference ever to make it onto a Nixon’s Head recording.

On January 26, Jim laid down his final overdubs on our upcoming record. (Was it really that long ago that we felt we were nearing the finish line?) He put down a spot-on, single-take bass line on Mike’s “Mr. Fill-the-Blank-In.” He also laid down four tracks of James Williamson-inspired guitar solos for “Looking at Me.” His approach to those guitar solos was a little different than usual. He was as prepared as ever, having read up on James Williamson, from his gear to details of his personal life, after I referred him to the solos on the Stooges’ Raw Power album, but once he got his footing with the part he allowed me to save a few takes. As usual, each of the four takes he approved for me to save and mix as we saw fit varied wildly in terms of individual notes yet retained a similar feel.

That night we played back rough mixes of the tracks, fading them in and out, then allowing all four solos, all 24 strings, to dive bomb and coalesce during the song’s grand finale. Andy, Mike, Seth, and I were pleased as punch, as we almost always were while listening to playbacks of ourselves, but I remember the hyper-critical, always-searching Jim looking more pleased than usual that night. Those moments of satisfaction that Jim occasionally allowed himself were well deserved. High five, man!

Our musical journey with Jim only scratched the surface of the musician and friend he was to so many. We will leave it to others to celebrate his work with the Tacony Music Hall and countless bands and jams that revolved around this guy’s bottomless pit of energy, good will, intelligence, and musical acumen. We were lucky to enjoy our share of the love and attention from Jim that will be missed so dearly by his wife, family, and friends.

RIP. And the wind cries Jimmy.