Years ago, when I was a college radio dj, some of the dance-oriented djs used to pull a mixing trick at the end of a track: while the record was playing, they would dramatically slow down the rpm and use that to seque to another song with the same or similar bpm. Or, to really make a point, they would slow the song down and just stop the record playing all together. I thought it was a pretty cool trick.

Fast forward to a few weeks ago, when I’m stuck in traffic driving across the Golden Gate Bridge, and just as the traffic starts to clear, New Order‘s “5 8 6” comes on my cd player. I had always liked New Order, but knew their singles better than their entire albums. So there I was listening to Power, Corruption and Lies, enjoying the car’s acceleration but also noticing that the 1983 track reflected the same Slow Slow Music technique that I had always associated with djs in the 90’s. (If you’re not a New Order fan, fast forward to around 7:05.)

But wait! There’s the technique again, this time as part of Joy Division‘s 1979 “Transmission.” (The technique is pretty obvious on this live version, even if John Cooper Clark talks over some of it.)

Is there a name for this Slow Slower Slowest Music technique? Were Joy Division inspired by some Kraut Rock or Kraftwerk number that I’m not aware of? Can you find other, earlier documented uses of this Slow Music fade out?

I look forward to the elucidation. 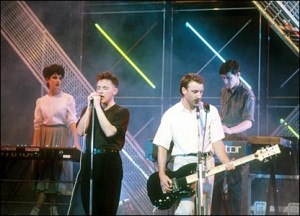 OK, maybe not a dedication but an observation from our fellow townsman, hrrundivbakshi, who is in the UK. He texted me last night with this request:

I’m in the UK at an otherwise totally irritating massive rock festival. Despite my dire immediate artistic surroundings, I have to say my eyes have been opened by one band in particular. Since the internet is basically unavailable on the Isle of Wight, please post this two-sentence concert review: