I’d like to start this historic post by thanking “snyder” for alerting us to a problem with the Categories links. The Back Office will certainly look into why the “Users Guide” category, for instance, no longer links to all threads specified for that category. I SUMMON THE BACK OFFICE TO CHECK OUT THE CATEGORY LINKS AND SEE IF THEY CANNOT BE RESTORED TO THEIR INTENDED PURPOSE. Thank you.

Next, I would like to commend “snyder” for voluntarily leaving the H-block, coming into the light, and ending his RTH Hunger Strike. In the soft-spoken,, tactful manner that characterized his participation on our original listserv version of Rock Town Hall, he worked through the technical glitch of the Users Guide category and posted the following astute comment and thread-initiating question:

Where the fuck is this user’s guide? A fuckin’ comment box does not explain shit. If this is how one is greeted when coming out of the wilderness, better to be the Unibomber.

Well, I’ll put the point of things here and leave it to whatever circle of hell this will be trapped in:

Would someone explain to me the appeal of the Miracle’s “Save Me?”

I got an email the other day with this video:

Two acts in the Snyder pantheon, the Saints and Undertones, (as well who knows how many others) have also recorded covers of this in their day. Why is that? Why not a cover of “More Love” (my own slightly more personal favorite amongst dozens of other great Miracles songs)? It’s not that I dislike “Save Me,” but in it’s original time I have to say it barely made an impression on me. And even today I can’t say anything stands out about to me.

The man has spoken. In public. For all the world to see. Please explain to our old friend the seemingly exaggerated love for “Save Me” among punk artists.

Lame or are the kids alright? Has One Direction chosen an apropos gem to cover or is someone else behind the scenes sending a covert message to parents that these boys are cool enough to hang with your daughter?

If you ask me, the world “blew it” in generally ignoring The Undertones. Actually, I’m not sure I can condemn the UK, which has seen fit to produce 2 documentaries on this little band that could, but my fellow countrymen can bite me for leaving proper appreciation for this band to what seems like a few dozen scattered Americans of my generation and the slightly younger Townsman Berlyant, who once bravely saw fit to defend the band’s lone demi-turd of an album, The Sin of Pride, at our first (and as-yet only) live Rock Town Hall symposium. Among the slightly younger generation of folks who should know better, not even Townsman Oats digs The Undertones. For shame! More power to Berlyant for his brave stance! More power to The Undertones!

Please note: the clips I’ve included are not necessarily what I consider the band’s “best” songs or available live video performances. In fact, they’re from the period that even most Undertones fans consider the end of the line, from 1980’s overlooked gem Positive Touch (their most important contribution to humanity, in my opinion) to the aforementioned swan song by the original line-up. (They’ve since re-formed with an adequate replacement lead singer for the proud Feargal Sharkey, allowing folks like myself to celebrate and pay homage to the band’s past glories.) What these clips do show and what I have valued so much since stumbling across their unbelievably energetic and creative first album is a combination of rock ‘n roll smarts, energy, and idiosyncrasy that was unmatched among a generation of bands understandably influenced by the The Ramones and Nuggets records. With no “ace” musicians, nothing more distinctive than a unique singer and an endless supply of peppy riffs, they always relied on each other as a band. There was never a song that was clearly the tertiary songwriter’s bone or an excuse for the lead guitarist to wank off. The Undertones made my music, the way me and my friends could imagine ourselves making music. I am disappointed in you, world, for not seeing things my way.

The point of this thread, however, is not to focus on The Undertones but to share what other ways the world blew it. What artist that failed to capture a larger audience and better sprinkle their magic pixie dust through the land makes you shake your head and feel the world blew a once-in-a-generation opportunity?

If my father’s side of my family kept their genealogical records straighter than they did their own lives I’m one-eighth Irish. This should give me at least one-eighth reason for joy on St. Patrick’s Day, but a childhood of family induced shame of that small part of my heritage still makes it tough for me to muster any enthusiasm for the wearing of the green and all that goes with the holiday.

Deep down I spend part of St. Patrick’s Day, including the days that lead up to it, mocking the Irish and their history of drinking and bad food. It’s a time for my Italian-American pride to secretly bask in the glory of my maternal side’s delicious food and sensuous homeland. It’s a time for me to derisively laugh at the memory of my dead-but-much-longer-than-that-gone father and all the hell he caused for the family.

“Jimmy,” my maternal grandmother—my first favorite person on this earth—would rib me from as early a time as I can remember, “are you Italian or Irish?” END_OF_DOCUMENT_TOKEN_TO_BE_REPLACED

Can you imagine the 1970s dollars and pounds that must have been waved in the direction of the former members of The Beatles to reunite? In a memorable parody of those offers that the tightasses who own the rights to Saturday Night Live continually wipe clean from YouTube, producer Lorne Michaels, offered John, Paul, George, and Ringo a whopping $3,000 to come back together. Bless the boys for resisting the temptations they must have faced, although that “Free As a Bird” thing and news of Paul releasing his avant-garde recording, “I Could Have Slept With Yoko First,” have threatened to make that blessed holdout a distant memory.

Recently, the members of ABBA have made much of the fact that they shan’t be working together again for any amount of money or good cause. Good for them! Who really wants to see those once-hot Swedish guys prancing about in silk jumpsuits at 60?
END_OF_DOCUMENT_TOKEN_TO_BE_REPLACED 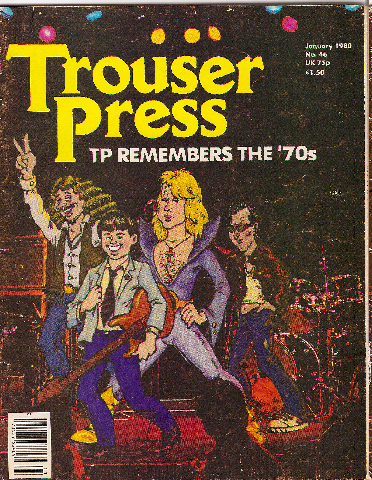 Some of you are aware of the profound influence issue #46 of Trouser Press had on my young rock nerd’s development. It was the first issue of the new decade, and my favorite underground rock magazine kicked it off with a snazzy, double-length issue that looked back at the decade that had just passed and looked ahead to the promise of the 1980s!

As some of you are also aware, the promise of the 1980s soon turned ugly for this once-young man’s dreams of a return to energetic, concise rock ‘n roll on the radio. Instead of The Clash, Elvis Costello & The Attractions, The Buzzcocks, The Jam, and The Undertones ruling the airwaves, the underground pop song movement would emerge victorious, Yamaha DX-7 synths in tow, as the synth-pop of mildly entertaining types like Thomas Dolby and Thompson Twins and finally the massively successful dance-pop of Madonna and Rock Town Hall flashpoint Prince. Despite the success of a few more commercial contenders from that scene, like The Police, The Cars, and Blondie (and Costello and The Clash, to some extent), the closing credits were rolling on the dream.

That didn’t mean I couldn’t spend the ’80s seeking out cool, underground albums from the ’70s that were mostly alien to me before I’d reached my late teens and became a loyal Trouser Press reader. I scanned what’s still my touchstone article from that issue, “Some 1970s Albums You Might Have Missed” (~40 mb; click to download). It’s a large file, but if you download it and print it out, you’ll have some choice bathroom reading! Then – after you’ve washed your hands – I’m sure you’ll want to log back into the Halls of Rock and share your thoughts on these albums, those times, your own significant moment that helped launch your personal rock nerd journey.
END_OF_DOCUMENT_TOKEN_TO_BE_REPLACED