Which rock vocalist says “woo!” the most? Backup vocalists or secondary band members saying “woo-oo-oo” behind the lyric don’t count. I’m looking for the lead singer guy or gal who says “woo!” with the greatest frequency.

Can anybody beat Diamond Dave Lee Roth in this category? I have my doubts.

Has any group of dedicated group of backing vocalists added more to a song than the Pips do behind Gladys Knight on “Midnight Train to Georgia”? Their performance is essential to the song. If you must throw studio backing vocalists and band members who sing background vocals as well as play instruments into the discussion to make it a challenge, go for it with the knowledge that I’ll be tsk tsk-ing you for taking the easy way out. If I weren’t playing the “bigger man” you’d be fed up with me for my silly exclusions and seemingly on-the-fly rules.

I’m not the world’s greatest fan of backing vocals, but when done so when and when arranged as such an essential part of the song I can’t help but be dazzled. Whoo-hoo!

The sight of the half-dozen long-haired, bare-footed, overalls-wearing backing vocalists primed at the 26-second mark of the following Joe Cocker live take on “The Letter” must have been a great inspiration to 1960s-era choir kids gone to pot.

In our recent Stones-oriented Dugout Chatter, Townsman Oats hit the nail on the head regarding the question in the thread that most interested me: What’s Mick Jagger‘s finest hour (or 30 seconds) as a vocalist?

Certainly it’s the verse in “Beast of Burden” that begins with  “Now you can put me out on the street…”!

First of all, Mick is commanding. The tension for leadership within the Glitter Twins axis has always been a key feature to the band’s success. In this one moment Mick takes the wheel—and he doesn’t screw it up with one of his blackface or country bumpkin routines. Twenty-five years into his career Mick has finally become the soul singer he always wanted to be—on his own terms. This verse picks up on the work Jagger started in the ’60s, on songs like “Satisfaction” and “Under My Thumb.” Bravo.

Second, through the entire Some Girls album Mick’s voice is treated with the most-effective, straightforward vocal effects in the history of rock ‘n roll. If I could figure out exactly what effects are applied to that song and if I could apply to every song ever recorded I would. My apologies to all other great vocal effects ever used, but that’s the way I feel.

So there, Mick Jagger’s finest vocal hour is that verse from “Beast of Burden.” You’re welcome, in advance, for the role Oats and I have played in settling this debate. 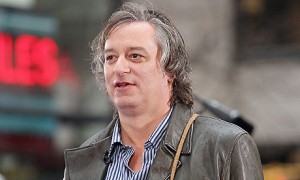 In His Own Voice

On his Facebook page, would-be Roxborough resident and Newbridge mayor Jon Wurster, partner-in-crime with Tom Scharpling on The Best Show on WFMU (my favorite 3 hours of radio—heard over the Web, often after the fact, in archive form) and drummer for Superchunk (among many others), asked the following question of his close, personal friends, a question that is right up our alley. Jon has approved of us re-posting this for discussion here. He looks forward to your responses.

News broke recently about a Peter Buck solo LP that’s in the pipeline. This will be the first the world hears his singing voice (as far as I know). What other major songwriting forces never sang in their bands? My entries (and let me know if I’m wrong, just don’t preface it with “You stupid idiot”):

The “money shot,” that big payoff moment… David Bowie provides one of rock’s all-time money shots at the 1:16 mark of “Heroes,” when he jumps up to the higher register. Even rock fans who have had issues with Bowie tend to dig “Heroes,” and I bet even the most down-to-earth, meat-and-potatoes rockers among get a little chill when his vocals leap an octave.

I believe a significant portion of 1980s music was founded on this device, surely not a device Bowie founded but one he drove into our collective conscious. Bono, in particular, has tried to work this money shot move into 75% of U2’s songs.

In future weeks we’ll examine money shot moments featuring other instruments, but today let’s focus on vocalists. What are some of rock’s other most-influential vocal money shots?

I caught the following Daryl Hall performance on Conan last night. It was a re-run.

I don’t have what’s called a “good ear.” In band practices, for instance, I’m often the last to know that someone’s singing off-key. It’s probably because of my limited vocal abilities that I treat vocal pitch like horseshoes and hand grenades.

As soon as this performance got underway, however, I suspected that Hall was singing way off key. He is, right? Please confirm that this is not just a matter of the song sucking.

Bring back Oates—and his ‘stache. And the blond beard’s still not working, Daryl.