Fennelly grew up in Westfield, New Jersey, which he left at the age of 17, hitchhiking his way to California with visions of a career in music. He had no music business connections, “Just an accoustic guitar, and a driving need to get out of NJ and my parents’ home.” On his Facebook page, The Music of Michael Fennelly, he describes the scene he entered:

Los Angeles in the mid to late 60’s was amazing. Very freewheeling, compared to the conservative East Coast from which I’d come. I revelled in the fredoms that were all around me, and loved my new life and new surroundings. I felt totally at home in the world of Hollywood hippies and long-hairs. And there was a prevailing sense of rebellion and try anything that was invigorating.

After kicking around (and sleeping in) coffeehouses, Fennelly quickly fell in with Curt Boettcher‘s musical world. “I played some low-level gigs with a band I formed in a coffee house, in which I was living. But, from there, I was cast into CBS Studios for marathon recording with The Millennium.” 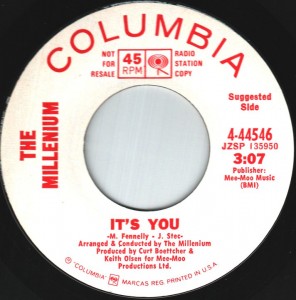 The Millennium was a studio band organized by Boettcher. The recording budget of Begin reached fairly astronomical heights, but eventual album sales did not come close to lift off. Boettcher and engineer Keith Olson, a “genius,” according to Fennelly, who would go on to produce Fleetwood Mac‘s massive albums, recruited the musicians and cooked up the sounds, but Fennelly says the process was more collaborative than some sunshine pop historians have envisioned. “We usually didn’t feel orchestrated by Curt, literally or figuratively, but felt encouraged to contribute ideas and approaches. Where Curt did manipulate a bit was on placing his stamp and his voice over others’, particularly during the mixing process.”

Fennelly comes back to Boettcher’s annoying habit of mixing his own lead vocals over those of the songwriter’s when talk turns to his memories of the recording of Begin‘s highpoint, the Fennelly-Joey Stec song “It’s You.” I was hoping to learn something about the powerful mix of acoustic guitars, pulsating bass, and phase shifting that characterize the song, but “What stands out, to me,” Fennelly said “is the sound of Curt’s voice, mixed higher than mine on the lead vocal. Didn’t get much airplay…”

“Keith,” he continued, “was very involved in Begin. Curt was descriptive about sounds; Keith created them.”

While recording with The Millennium Fennelly and his bandmates also worked on another studio concoction, Sagittarius, a similar project organized by Beach Boys’ associate Gary Usher, who called in Boettcher and his crew to make his musical dreams come true.

Other than playing one live gig, “at a college, poorly,” The Millennium ran its course as a studio creation. “After that, I kicked around a little,” he said. “I had a short-lived band with Doug Rhodes and Ron Edgar of Music Machine/Millennium, along with Goldbriars member Murray Planta, just back from a stint in Viet Nam. We cut some demos.” There’s an old demo in the stomping Music Machine of a Fennelly song called “Breakdown” that is worth checking out. Fennelly says he’s working with Sundazed Records to release some of the harder rock, unreleased stuff he’s done over the years.

“Then Crabby Appleton formed,” he continued, “and we played live all over. This was during the era of pop festivals. We played quite a few, and also huge halls in cities where we were on the charts, and clubs and dives in other cities.”

Fate beat Elekra Records to bringing Fennelly together with the members of an existing band called Stonehenge. “Stonehenge had submitted demos to Elektra, who had misgivings about both their singer and their guitarist. I had submitted guitar/voice demos to Elektra. Oddly enough, while Elektra was pondering a combination of me and them, I met the band in a club and got into discussions with the rhythm section, about how they needed me. I brought the songs, guitar, and vocals, and we were on our way very rapidly.”

Crabby Appleton’s debut album was produced by Don Gallucci, of The Kingsmen, Don & The Goodtimes, and Touch. Gallucci, who also produced The Stooges’ Funhouse, captured a sound that straddled the worlds of AM pop and the harder rock coming out of the late-’60s’ festival freakouts. “We had a classically influenced keyboardist in Casy Foutz, who was quite brilliant.” explains Fennelly. “We had a Cuban percussionist, who was very accomplished. I had written the songs on our first lp, before meeting or hearing Stonehenge. It just came together. No plotting. Just playing and arranging. I wrote ‘Go Back’ with an AM single in mind, again, prior to the band.”