What I know about Gene and Dean Ween’s life work is “Push the Little Daisies” (Ignore the enlightened commentary on this clip) and the Spike Jonze-directed, Philly-set clip for “Freedom of ‘76”.

These are from Ween’s 2nd and 3rd CDs and they place them in that novelty, jokey ’90s alternative universe with disposable things like Harvey Danger and Dead Eye Dick. I actually watched a live version of “Freedom” and the falsetto singing was pretty good but the guitar playing was below rudimentary. Ween may have had a little more drug humor edge to them since their next album, The Pod, showcases music made after inhaling Scotchguard. 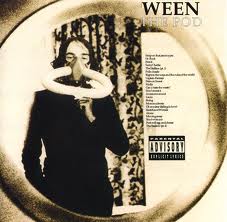 Don't try this at home, kids!

Things get more interesting with The Mollusk.

On “Ocean Man” the stoner lyrics are kinda clever and the treated vocals and island sounds make this a parody you can listen to more than once. Even better is their next record, the Beatles-pop White Pepper (clever title, boys). “Even if You Don’t” actually passes the test as a straight pop song.

Even the excessive guitar solo here works in it’s own way.

12 Responses to “What’s the Deal With…Ween?”