RTH: Once and for all: Did any of your guitar playing end up on Never Mind The Bollocks?

RTH: Do you still have the demos that you worked on with them? (Not the “Spedding Tapes,” which I’ve read were not your original versions.) Can I have a copy? (I’ll trade you for a Rock Town Hall T-Shirt.)

CS: Dave Goodman copied my tapes, adding echo. I have no idea why he did this. My tapes are the ones without echo and low-fi versions of them taken from a 1976 cassette were included by Virgin Records on the reissue of “Bollocks” put out at the time of the first reunion. I had the studio masters of the tapes. Still have a digital copy on a CD. No one at Virgin asked me for the originals.

RTH: There seems to be some mystery regarding your involvement with The Bay City Rollers. Please take this opportunity to set the record the straight.

CS: I didn’t think I played on any of their sessions. I may have done since the band members were rarely at recording sessions (except for the lead singer). One band member (forget who) and one session guy (drummer Clem Cattini) thinks I played on the sessions.

RTH: You’ve participated in a vast number of musical genres but your solo work has a definite blues/rock/rockabilly bent to it. Is this where your musical heart is?

RTH: What is the “Chris Spedding Sound?” What do you think has made you so valuable to so many great artists?

CS: A Gibson guitar played thru’ a Fender amp with no pedal effects? 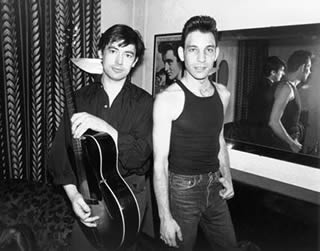 RTH: On It’s Now or Never, your recent collaboration of Elvis Presley covers with Robert Gordon, you’ve got some big shoes to fill. How did you balance your own guitar style with those of the songs’ original parts?

CS: I tried to play like Scotty Moore. If it sounds like me it’s cos I didn’t succeed.

RTH: It seems that you’ve done more with Robert Gordon than any other individual artist. Is that accurate? How did you guys get together? Looks like you’re touring in 2008. What are you guys up to?

CS: We’ll keep playing as long as people want to hear us.

RTH: Finally, we play a little game now and then called Dugout Chatter, in which we pose sometimes silly questions to poll readers’ gut responses. We like to have our guests answer such questions. Here goes. Your quick, gut reactions or quick answers are all we ask.

Next: Chris stirs up some Dugout Chatter!