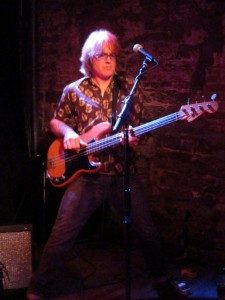 But I digress…cry not for my old friend. For the past decade he’s returned to his usual Blake Griffin-like approach. This past Saturday at the North Star Bar the high I brought to the show from seeing the historic Thome home run was maintained by the high-flying bass exploits by Steve Wynn and the Miracle 3’s Dave DeCastro and The Fleshtones’ Ken Fox.

The otherwise excellent performance video, above, by Wynn and his band doesn’t do justice to DeCastro’s liberal application of the secret sauce at Saturday’s gig. I can’t hear the bass as loud as I like coming out of my computer speakers, and the camera crew fails to focus on the guy’s cool 1969-era Phil Lesh Look. In the hard-surfaced-yet-funneled room at the North Star there was nothing secret about his active, swinging, pumping bass parts. Using his All-Access Pass DeCastro threw in quick, fantastic, winding  bass runs in response to key vocal lines, never disrupting or threatening the enthusiastic pounding of drummer Linda Pitmon and never coming off like a wannabe lead guitarist, a position held down with aplomb by bronco-busting Jason Victor. The set put on by Wynn and his band was inspired. Each member of the band delivered their share of Money Shots. It was hot! The Miracle 3 provided a perfect foil for Wynn’s naturally stiff, succinct talents. This may shock longtime Townspeople, as knowledgeable as I am known for being, but beside the first Dream Syndicate record I didn’t know a lot of Wynn’s music. I have always enjoyed Wynn’s music in passing, playing over a record store’s speakers or at a friend’s party, but I’d never previously heard it, perhaps, as it was meant to sound!

After hearing me rave through the band’s set and the prominence of DeCastro’s bass, Townsman geo said to me, “You know what these also guys do that you’re a sucker for? They play every song twice as fast in concert. You’ll never hear them this fast again when you go back and listen to the records.” Then he laughed. Man, I’m ready to dig in on the Wynn compilation that longtime Wynn fan sammymaudlin made me about 5 years ago. Hell, I’ll speed up the tempo and boost the bass if need be! 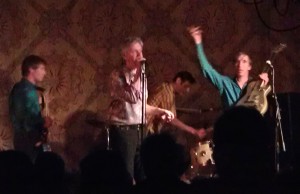 The Fleshtones at the North Star Bar

The Fleshtones closed out the 4-band set, which for me began with a rocking, highly gelling set by old-time Philadelphia music scene friend and NYC transplant Lisa Cortes‘ band, Palmyra. As I mentioned at the start of my interview with Peter Zaremba last week, I hadn’t seen the band since the late-’80s. In thinking about the half dozen shows I’d seen by them in that decade and the things Zaremba said to me in our recent interview, I expected no tremendous departures from their shows and sound of yore. And that’s cool; who wants The Fleshtones to release their version of The Ghost of Tom Joad? Sure enough they delivered. Slightly swept back gray hair and all, Zaremba could still swivel his hips and rally a crowd as I never could and never will. Guitarist Keith Streng and drummer Bill Milhizer had put on maybe 3 ounces between them, losing none of the energetic rhythms and frat-party sensibilities that make me think The Fleshtones might be the one band on earth most equipped to cover one of my favorite post-1950s /pre-Beatles rock ‘n roll songs, Joey Dee & The Starlighters‘ “Peppermint Twist.”

Rock snob that I am, as the show began, I was most concerned with the “new guy,” 20-year member bassist Ken Fox. I know, I’ve got a lot of nerve, but at first I thought the “new guy” was showboating a little more than a new guy should showboat. Like the Miracle 3’s DeCastro he was all over the neck on his vintage Fender bass. Unlike the fairly stationary, nerdy-looking DeCastro, however, this “kid” Fox was hamming it up as much as his bandmates. This does not reflect well on me, but I was slightly put off for the first few songs by Fox’s brassy stage presence. Then, as he leaped from octave to octave like a subsonic Spiderman, proudly lifting the neck of his bass to the heavens, you know what I thought?