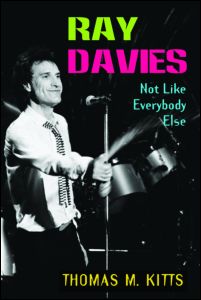 I first met Tom Kitts at a meeting of the Popular Culture Association. Tom and the late, great Mike Kraus used to host sessions where people presented papers on The Kinks, and I attended five of these sessions over the years, presenting and also listening to papers by Tom, Mike, and a rotating group of Kinks scholars. It’s more fun than it sounds like, and it’s always great to be around other music fanatics.

Tom has now published his magnum opus, a critical biography, Ray Davies: Not Like Everybody Else (Routledge, 2008). Tom is a professor of English at St. John’s University in New York City, and he took time out of his busy schedule for an interview about the book and more generally Ray Davies and the Kinks. If interested, click on this Amazon link to get your copy of the book. I’m sure any Kinks fan will find it a great read.

In general how has the feedback on the book been?

While formal reviews are just now starting to appear, the feedback has been very positive. Kinks fans seem to appreciate the focus on Davies’ work — even if they don’t always agree with me. I have done a series of readings and discussions and I have to say that I have been very pleasantly surprised by the positive response I have heard not only at the readings but also in emails from readers across the country and in Europe.

Any reaction from anyone connected with Ray or the Kinks?

I did hear from Grenville Collins and Peter Quaife, who both liked it very much. Both liked the emphasis on the art, which both were a part of and which both are very proud of. I spoke to Ray briefly after his recent show in New York and he seems pleased by the publication. We joked about how long it took for me to get it out. He has a copy, but he said that he hadn’t had a chance to read it yet.

7 Responses to “Interview: Tom Kitts, Ray Davies: Not Like Everybody Else”