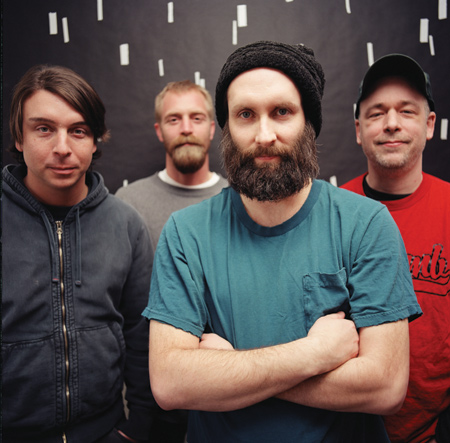 Any long-term follower of discussions in the Hall will note the ongoing importance of discussing Look as a factor in the success of musical acts. Today, we’re exploring a lesser known but nonetheless important Look phenomenon: The Rhythm Beard.

Essentially, a Rhythm Beard is in use any time one member of a band tailors an aspect of their Look to serve a supporting role or to act as a foundation for a bolder, more dynamic version of the same Look being used by another member of the band. Above, we see how the trademark great, big, bushy beard of Built To Spill frontman Doug Martsch might overpower a fully clean-shaven band or lose its own heft if countered by a matching beard. Instead, bassist Brett Nelson cultivated a perfect Rhythm Beard, one that would not draw attention away from Martsch’s lead, but would instead perfectly complement Martsch, providing a point of comparison that would only enhance appreciation of his facial landscaping. One could argue that, taken alone, Nelson actually has the better beard – the downward sloping mustache perhaps evoking Levon Helm’s award-winning Spanish conquistador Look – but it remains clear that Martsch’s beard is the main event, and Nelson’s is there to subtly make it work. 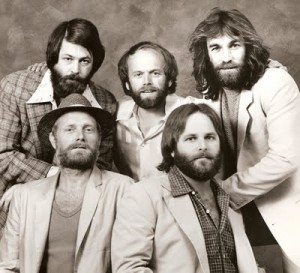 Carl & Their Lack of Fashion: So Tough

That quiet selflessness indicates that the Rhythm Beard is a sign of good teamwork at play in a band dynamic. Consider Rock’s most famous Rhythm Beard player, Carl Wilson. When the Beach Boys entered their controversial bearded phase, it was open season within the band. Perhaps speaking to their respective inner turmoil, Brian Wilson went for a messy, cabin-in-woods clump of facial hair, while Dennis chose an unkempt, werewolf-style Look. Meanwhile, Mike Love displayed the total control of mind and body he’d achieved through gaining higher consciousness by first growing a massive, all-knowing, all-encompassing beard before eventually parking on a Van Dyke in his later years. (Above, we see Love in his transitional “Torgo” phase). For his part, Al Jardine was only interested in a beard designed to mirror his hairline.

If the band was to continue to function as a unit, it was up to Carl to step in and deliver a beard that could function as a bedrock for the entire rest of the band. He delivered in spades, providing a beard with enough body to support Brian’s shaggy rug, Mike’s enlightened guru cascade or Dennis’ sinister lupine beard at one end, but still sensible to anticipate Mike’s later Captain’s Special trim and Al’s “I’ll Have Whatever Mike’s Having” beards at the other. 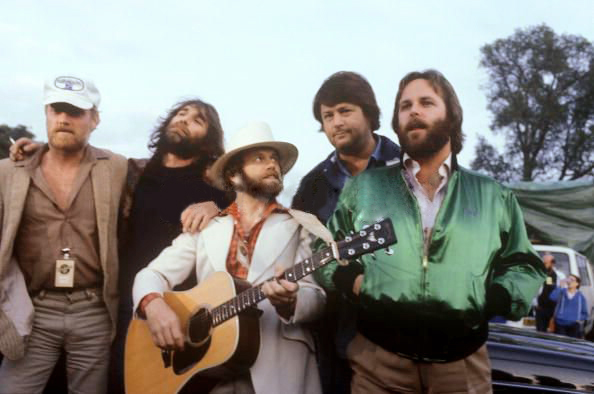 Above, we can see that Dennis has tragically taken over on Lead Beard as Mike settles into his Captain’s Special period and Brian seeks to get back in the game. Note that Al – having accepted hand-me-down’s in the form of Mikes Torgo outfit – looks on in admiration as Carl’s beard continues to make all this possible. 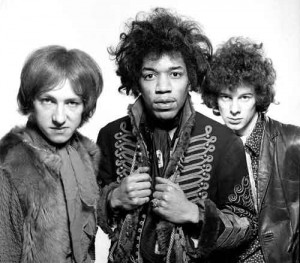 It should be noted that, though we call this phenomenon the Rhythm Beard, it is not limited strictly to matters of facial hair. Any time one band member offers up a facet of his or her Look to provide support for another, it can be said that they are Wearing Rhythm or Growing Rhythm. Mitch Mitchell was one of Rock’s great Rhythm Hair players, generally downplaying his own locks to help out the rest of the Experience. Noel Redding, meanwhile, routinely grew out his fro to the point that one could argue he was on Lead Hair, or that he and Jimi Hendrix were on Dual Lead. It’s no coincidence that Noel and Jimi clashed so often in the studio, while Mitchell was recruited to a part of The Dirty Mac. 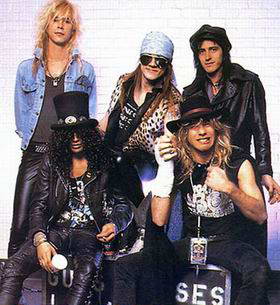 Much like all of Badfinger “playing rhythm” on All Things Must Pass, GNR once employed a complete Rhythm Hat section

The concept is also applicable to accessories. Although Slash always wore Lead Hat in Guns ‘n Roses, most of the band supported him by Wearing Rhythm in the early years. Later, once Slash’s top hat was established and entrenched as part of the band’s logo, Axl would take over sole Rhythm Do-Rag duties. This should also serves as a reminder of the teamwork aspect of the Rhythm Beard: even frontmen can graciously Wear Rhythm in support of a secondary band member’s Look.

Note: The Rhythm Beard should not be confused with situations where an entire band wears a “uniform” of some kind (see: early Beatles, the Polyphonic Spree). In the case of a band Uniform, all individual Looks are downplayed for the sake of honoring a band’s gimmick or pushing an overall Unified Look Theory. And neither the Band Uniform nor the Rhythm Beard should be confused with another, rare stunt in the Look playbook, in which a frontman employs a member of their backing band outfitted specifically to look curiously like said frontman. See Prince, who would stock the Revolution first with Andre Cymone and later Brown Mark. This move has been commonly dubbed as the Poppelganger or Pulling a Saddam, in reference to the practice of military dictators who surround themselves with decoys in the hopes of fooling potential assassins.