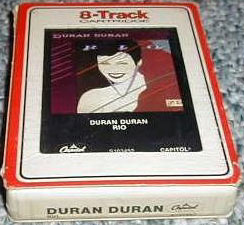 A roadblock in any format.

Beside demonstrating a lack of exquisite taste and suggesting a need for me, should the girl and I begin dating, to exhibit more tolerance for her tastes in music than I felt capable of exhibiting, a copy of Duran Duran’s Rio signified the girl’s probable identification with the new decade’s mainstream celebration of androgyny and pudgy English singers with bad hair. I sensed that any copy of Duran Duran’s Rio was a sign that I would show up at this girl’s door some day and find her dancing spasmodically to “Hungry Like a Wolf” while sporting a new, unexpected (ie, unapproved) spiky, streaked hairdo and brightly colored high heels. The hippie-loving-yet-desiring-of-traditional-stand-by-your-man-values guy in me couldn’t help but feel this way. I am not exactly proud of sharing this. I was open to many things, but I wasn’t too open to any woman I was dating suddenly showing up like the trendiest character from a John Hughes movie.

Despite the kindness, wisdom, and gentleness that has come with middle age, I maintain a core belief that the ’80s was a frigid period in terms of mainstream cultural signifiers. The Rio album cover heralded the arrival of ’80s Hair Salon Artwork in rock ‘n roll, a visual cue for the late-’80s/early-’90s phenomenon of MTV and VH1-driven Fashion Rock. What follows in this Rock Crimes case against the album cover art for Duran Duran’s Rio might make some of you extremely uncomfortable. Should you choose to stop reading now, the court will put you down for a GUILTY! verdict without further suffering. For those of you with the stomach to move deeper into my ’80s heart of darkness, step right this way.