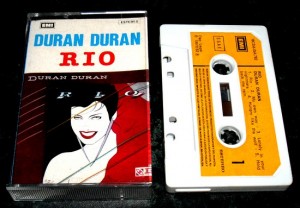 So my efforts to walk through the ’80s with a perpetual (and optimistic) hard-on were thwarted. Is that reason enough to lock up the album cover for Duran Duran’s Rio? I say, yes, but perhaps you need a more compelling, musically relevant reason.

I saw this headline today on someone’s Facebook feed. This is what I’m talking about:

Rock ‘n roll has always coexisted with the world of fashion, but rock ‘n roll was a little cooler; it promised (or at least imagined) a little more substance. As MTV and VH1 blurred the line between these worlds, rock ‘n rollers found it easier to simply sell out to modeling agencies and extend their shelf lives in ways artists of earlier generations could never imagine.

Courtney Fucking Love! What has she done of merit the last 10 years? Has she even OD’d or fallen out of a halter top in public?

Marilyn Fucking Manson! Did he ever matter? What can he possibly represent that is valid after all these years of not having done anything of merit? Andrew W.K. has given the world more, plus he’s actually good looking enough to be worth photographing. Does anyone get a hard-on over Marilyn Manson and Courtney Love?

I can’t comment on Ariel Pink. He looks like he’d be working in a file room if he wasn’t good at sampling other people’s records, or whatever the fuck he does. I can’t imagine getting stiff over him either. Watch the carbs and treasure that bleached mophead while you’ve got it, my friend. A hard rains-a-gonna-fall.

What does the fashion world get out of pretending that unattractive people are worth salivating over? I’m not suggesting, mind you, that I’m god’s gift to rock ‘n roll or sexual fantasies, only that I want my rock ‘n roll and sexual fantasies to be meaningful and perhaps just slightly out of reach—not completely out of reach, like the cartoon woman on the Rio album cover. (Shoot, who would that woman be if she did come to life, Sean Young? She turned out to be a deserving booby prize for the sexual fantasies of young men in the 1980s, no?)

It’s that just-out-of-reach quality that keeps us striving, isn’t it? We need greatness. We need people in the arts to be so great that they not only make us feel alive and that life is worth living, but that it may never be as good as we desire. Otherwise we’re setting ourselves up for a lifetime of watching MTV’s Rockin’ Fashion Awards and Excuse for a Garbage Reunion, or whatever they call that event. This lame rock-fashion marriage seems to me part of a grand conspiracy to lower our expectations for both our ideals of rock ‘n roll and beauty so that we can, as a nation, continue to get fatter, uglier, and have worse taste in music.

Getting back to my issues with those real and hypothetical girls (and again, I’m using the term I had the right to use when I was only a couple of years removed from being a “boy”) from the ’80s with the copy of Rio at the front of their album stack, I feared that their owning that album expressed not only taste in music I would be forced to endure if we ever felt a deeper connection on levels it might be argued were more important than music, but an identification with the self-absorbed, unattainable, mercurial behaviors suggested by that salon art-worthy drawing of the carefree, smiling proto-Sean Young. That type of girl already broke my heart—and I had to suffer through her playing that album in my presence before things got worse!