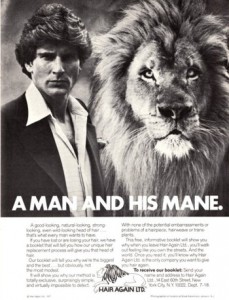 By the ’80s, Hair Salon Artwork changed. There were less soft, inviting photographs and more stark, harsh, often cartoonish images used to show off the era’s hairstyles. Think of the photography of Helmut Newton. Or that damn cartoonish model smiling at no one in particular from the Rio album cover. There was no invitation to join these women, to be their soulmates in flowing locks and tight-yet-loosely buttoned clothing. The models of ’80s Hair Salon Artwork challenged horny young males to enjoy them at the boys’ own risk, from an exclusively voyeuristic perspective. Not that I didn’t take on that challenge now and then, but it left me with a sense of guilt and shame that no warm Farrah-styled ’70s image ever left me. For shame, Rio album cover and ’80s Hair Salon Artwork!

So my efforts to walk through the ’80s with a perpetual (and optimistic) hard-on were thwarted.