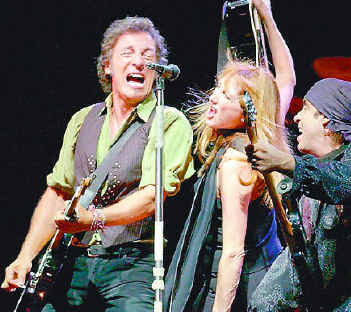 On some as-yet-undetermined date in some as-yet-undetermined city (surely a United States city), Bruce Springsteen and His E Street Band struck the powerful, unifying, healing pose that’s come to be known through the Halls of Rock as Rock ‘n Roll Iwo Jima. This is a pose that had never before been perfected on stage, not by Seger, John Mellencamp, or U2. Today we will attempt to define this term for future generations of musicians, rock critics, and music lovers, and we will begin to trace its development.