It’s no secret that, like a lot of young teenage boys in the early-to-mid-1970s, I found Carly Simon hot. Although I never cared much for any of her songs beside the outstanding “You’re So Vain” and, OK, I’ll admit it, her duet with James Taylor on “Mockingbird,” there was a sense of anticipation over the release of each new album cover. With her XL smile; sleepy eyes; soft, flowing fabrics; a flexible, acrobatic posture; and a soap operatic personal life Simon was rock’s safe-as-matzo Jewish American Princess. She wasn’t tangled up in that smelly CSNY crowd, like Joni Mitchell. She wasn’t a practitioner of witchcraft, like Stevie Nicks. She made no claims to being “one of the boys,” like Linda Rondstadt. Carly was all woman, more like one of my Mom’s younger waitressing friends than a rock star yet not half as square as a Barbra Streisand, who couldn’t manage an acute angle alongside renegade Kris Kristofferson. For a middle-class boy venturing into the world of sexual longing and rock ‘n roll, she was as pervasive and only mildly daring as a woman’s subscription to Cosmopolitan.

As I got into my later teens and became both more judgmental and daring, the mid-’70s appeal of Carly rapidly diminished. By 1981, when the likes of Debbie Harry and Exene were my maturing notions of rock womanhood, I had no idea the following video ever existed, of a song called “Vengeance,” which thankfully I don’t recall ever hearing. Talk about an ultimate rock soft-on. Let’s examine the moments that would have immediately spelled the end of my young lust for Carly, had I not already been heading in that direction. 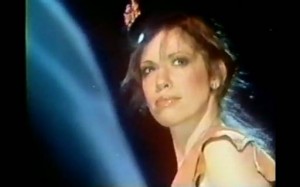 0:00–0:13: This video’s director manages to capture Carly Simon and her all-star studio backing band in a rapid-fire sequence that screams, “Cheese alert!” If the peppy piano player and Chia Pet-like drummer Steve Gadd, clad in what looks like a maroon velour sweatsuit don’t scare you, in struts a wind-blown Captain Carly, wearing a low-cut, high-waisted peach ensemble, followed by a jump to the remarkably adaptable bassist/Chapman stick master Tony Levin, wearing white suspenders. Carly’s “confident” over-the-shoulder stare at the 12-second mark explains why this fine-looking woman was not able to crossover into an acting career.

0:34–0:37: Thankfully the camera pulls back from Carly’s Cheshire Cat mouth just at the point when she leans over to remove the Captain’s hat and flip back her mane, Rita Hayworth-style. Now, perhaps, the trace of teenage boy still left in me can focus on the humble joys of just-post-prime Carly Simon. 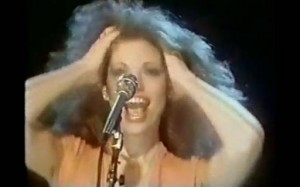 0:45–1:00: Free from the Captain’s hat, Carly enters a hair-raising, Farrah-inspired sequence. Strong stuff that’s offset by another brief cut to the chrome-domed Levin. The music is still terrible, mind you, but that barely factored into my initial 13-year-old interest in this artist. Anyhow, without knowing or even thinking I remember any of the details of Simon’s 1983 split from Sweet Baby James, I sense this video was constructed by Carly and her director as an act of pre-separation empowerment. To establish her credibility as a “real musician” she has surrounded herself with the finest studio cats money could buy. Is it any coincidence that her next long-term relationship following JT was Gadd’s rival for studio drumming, the more easygoing Russ Kunkel? (I can imagine Simon first having made a play in vain for Gadd, a studio musician whose monk-like devotion to his craft enabled him to develop his signature “Fifty Ways to Leave Your Lover” drum roll.) “Who’s Captain, now?” she seems to be saying. 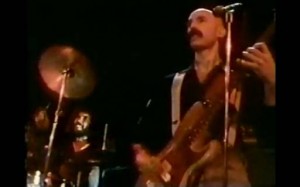 1:10–1:43: Shot almost entirely in profile, this sequence is meant to let you know that Carly’s not only Captain of this ship but the the masthead. The keyboardist/boatswain of this vessel rears up to provide backing vocals. After punctuating a line with a raised hand and a fierce stare Carly allows herself to break a smile as she turns to congratulate her rhythm section for helping her navigate this difficult course. The sense of accomplishment expressed by the rhythm section is mutual and palpable.

1:50: A glimpse of Carly’s black bra is evident, putting the viewer in touch with his inner 13 year old. 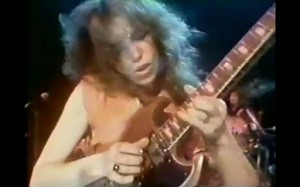 2:05–2:23: Carly suddenly appears with an awkwardly held, strapless Gibson SG to rip out a solo?!?! This is a video; why didn’t someone first think to yell Cut! and get her strapped into that bad boy? Now, as I imagine I may have felt had I seen this video when it first aired, I am confused and distracted by competing thoughts regarding her technique, her sudden resemblance to Angus Young, and how all this colors her unique place in Rock Womanhood. To her credit she chose not to holster.

2:24–3:25: Carly begins pumping her arms and doing a not-so-appealing hip sway. Thinking back to the supreme sense of satisfaction provided by her Rita Hayworth-referencing hair flip, I now fear the converse, the extreme sense of disappointment in a—there it is, at the 3:12 mark—Thanks for those dance lessons, Mom! white-girl dance routine. As with Hayworth in Gilda, the dance sequence works like Kryptonite against the powers of the hair toss. 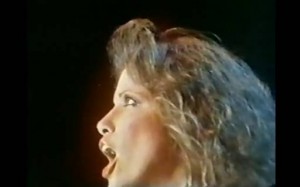 3:26–end: Carly grabs the mic off the stand and drives home the end of this song with everything she’s got, with Gadd pounding freely in ways his best-known employer named Simon, Paul, would not allow. The final pose Carly holds for a full 6 seconds is somewhat disturbing, confirming that the present-day me is glad the 13-year-old me is a boy of the distant past.