The effort to recast the sweaty, muscular Boss to His public continued with the video shoot for the album’s shocking first single, “Dancing in the Dark.”

“Something’s a little different,” explained Wheeler, getting us back into the mindset of His fans circa 1984. “The music is pumping. The Boss is pumping…Heck, he’s pumped!” laughs Wheeler, before pausing and continuing in a more sober tone.

“The Boss is hot, tired, and sweating. His hair is becoming tangled, and he is without extra layers of clothing to absorb the sweat and cover his tangled mop. Suddenly, a woman pushes her way out of the crowd and stands in front of Him.” Wheeler stops the video at the well-known moment when a young Courteney Cox takes the stage. 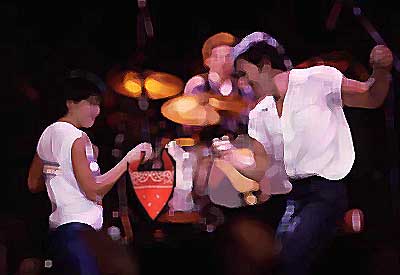 “Here’s where I take some creative liberty,” he explains while introducing his latest work in this series. “In my depiction of this scene, the young woman offers a clean bandana to gently wipes His face.” As I gaze over Wheeler’s painting, I tell him I see the 1980s in a new light. The artist is not surprised.

“This act, which I believe is implied by the video, softens the image of the bandana and enables Bruce and His band to keep dry while rocking out for hours on end AND promoting the physical fitness trend that continues to this day! It’s revolutionary,” he concludes, “and nothing less than what we’d expect from Him.” 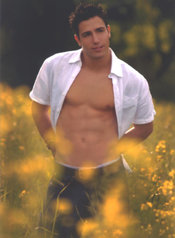 The Artist at rest.