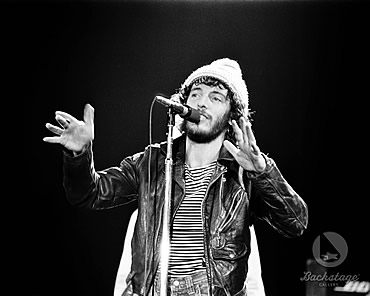 In our sixth Station of The Boss, artist Hans Wheeler asked us to look at The Boss in a new light. “Perspiration was increasingly becoming an issue for The Boss and His E Street Band in the early ’80s.” explains Wheeler. By 1983, concerts typically ran for 4 hours or more, testing the band’s improved cardiovascular fitness. Wheeler says the band was up to the challenge, and decided to emphasize their newly crafted “guns.”

“The scrawny, hairy, sweaty, bearded, wool cap-wearing Boss was a thing of the past,” said Wheeler, as we sipped soy vanilla lattes on the roof deck of his Dayton, Ohio condominium. “He liked the way the sweat ran down His sculpted physique, and He wanted to make sure this Look worked within His show.” The problem, Wheeler explained, was how to keep all that sweat from gumming up the works of the band’s equipment.

“In the old days,” Wheeler continued, “the hats, beards, vests, and jackets sopped up enough sweat to keep the gear dry enough to play through the night.” Now The Boss and His band were often down to one layer of clothing, with their sleeves rolled up high and tight over that finely honed artillery. Eventually something had to give, and the band introduced a new article of clothing into its ranks: